The report was produced as part of “Media Against Hate”, a Europe-wide campaign initiated by the European Federation of Journalists and a coalition of civil society organisations 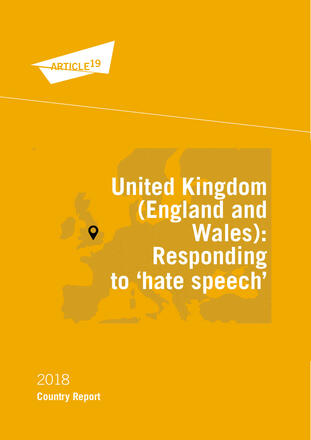 The report deals with the United Kingdom (UK), with focus on England and Wales.

Criminal law has not been used against a media outlet for many years. It has never been used for engaging in hate speech in relation to any person or group of persons on the basis of a protected characteristic.

There was an increase of hate speech against migrants and refugees around the Brexit campaign. Contributions to intolerance came from UKIP, but also from prime minister Theresa May. Prejudice also appears in media, both legacy media (especially tabloids) and new ones like social media. The murder of member of parliament Jo Cox has also led to calls for a reform of legal provisions around hate speech.

The UK has no written Constitution: the first statute protecting everyone’s freedom of expression is the Human Rights Act 1998 (that came into force in 2000), that incorporated the ECHR in national law. The Bill of Rights 1689 protected only freedom of speech of Members of Parliament. English anti-discrimination law has developed since the 1960s with statutes concerning race relations, sex, and disability discrimination, but it remains a patchwork, with the Human Rights Act achieving some unification. The Equality Act 2010 codified into one piece of primary legislation protections based on age, disability, gender identity, pregnancy and maternity, race, religion or belief, sex, and sexual orientation.

England and Wales have no criminal code: criminal law is made of different acts of parliament and the common law. Some relevant offences are included in the Public Order Act 1986:

There are several issues with these provisions in terms of their compliance with ICCPR:

Other offences may apply, including:

Prosecutors may only start a proceeding if a case passes the evidential test (there is enough evidence) and prosecution is required in the public interest (which is most likely the case in cases of hate speech).

In 2016, the Home Affairs Parliamentary Select Committee launched an inquiry into “Hate crime and its violent consequences”. In a report, it stated that legal provisions should be clarified and updated (most of them predate the internet).

There are no administrative hate speech offences under English law, except for regulatory framework on the media.

There are a number of civil causes of action that may apply in cases involving hate speech:

Victims rarely seek redress under these provisions. There have been calls to review the applicable legislation as it applies to social media.

The Equality and Human Rights Commission (EHRC) publishes reports and issues guidance also related to hate speech. It may also have a “duty to make enquiries” in relation to hate speech in individual cases where the facts of a case suggest that a public authority or a body exercising public functions may have committed an unlawful act or may not have complied with the Public Service Equality Duty (PSED)”. These bodies include public service media such as BBC. The EHRC occasionally produces guidance for the media on reporting on certain minorities.

The UK government has no overarching policy promoting plurality, diversity, and inclusion of minorities in media, but occasionally develops ad hoc initiatives in this respect.

The Office of Communications (Ofcom), the regulator for the communications industry (including broadcast media), has legal obligations to promote plurality, diversity, and inclusion of minorities in the media. Public service broadcasters (not only the BBC) are required to observe the (Ofcom) Broadcasting Code. Some elements of the Rabat Plan of Action are included. Ofcom publishes its decisions and can impose sanctions. A limited number of breaches were found. The BBC has amongst its purposes to represent diversity.

Press is self-regulated. A royal charter provides a framework, but its reach is limited and there is no requirement related to diversity or representation of minorities. The two press regulators, IPSO and IMPRESS, created codes of conduct.

There is no general regulation relating to hate speech on online platforms, such as YouTube and Facebook. There have been regular calls by politicians for introducing dedicated legislation on content on social media but the UK government does not appear to be in favour of statutory regulation.