Violence and Harassment against Women in the News Media

A comprehensive picture of the dangers faced by women journalists around the world, based on a global, online survey shows that two-thirds of respondents experienced some form of intimidation, threats or abuse in relation to their work as female journalist 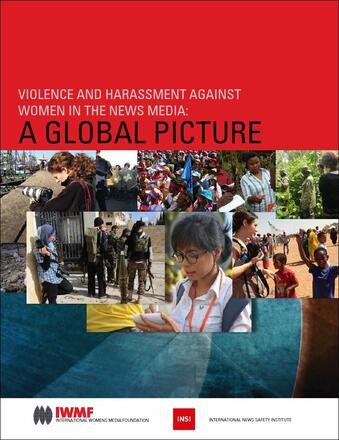 Persistent cultural norms tend to confine women reporters in the realm of “soft” stories and feature writing. Yet, female journalists are at the forefront of reporting from dangerous situations, and are constantly exposed to higher insecurity than their male colleagues.

The study is based on a global survey on harassment and violence against female media workers, launched in August 2013 and completed by almost 1,000 women from around the world. The survey gathered data regarding sexual violence, physical violence, sexual harassment, and information security threats experienced by women journalists.

This study finds that nearly two-thirds of survey respondents had experienced intimidation, threats or abuse in relation to their work (597 out of 921, amounting to 64,8%). In most of the cases, perpetrators are male bosses, supervisors and co-workers.

More than one-fifth (21.6%/118 out of 547) of respondents said they had experienced physical violence in relation to their work.

Sexual violence and sexual harassment constitute widespread forms of abuse against women journalists. Along with this, novel strategies of pressure against women in journalism seems to be emerging, particularly regarding Tapping, Hacking and Digital Security Threats. As stressed also in a 2016 OSCE report, online abuse against female journalist is a rising and alarming phenomenon, particularly as it is employed to organize smear campaigns and attempts to damage your reputation/honour