Watchdogs Under Watch: Media in the Age of Cyber Surveillance

In this report CIMA examines the relation between cyber surveillance and the limits to privacy and freedom of expression, highlighting the delay of legal regulations in this field 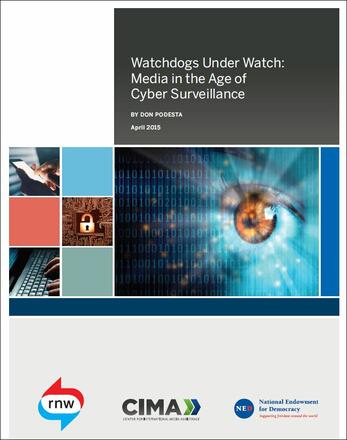 The report examines the impact of cyber-surveillance on media freedom, privacy and freedom of expression. Complemented with quotes by experts in the field and data-visualizations, the report takes the moves from the pervasive spread of cyber surveillance across the globe to assess how this impacts on media freedom.

Under examination are the behaviour of governments exploiting the potential of surveillance as well as the crucial role played by private companies. Gigantic corporations such as Google, Twitter and Facebook gather tremendous amounts of personal data and enjoy a broad discretion when it comes to make these data available for governments.

The risks that surveillance poses for private citizens are multiplied when considering journalists: “In authoritarian countries, journalists can become “one-stop shopping” for governments to locate dissidents and activists”. In this sense, surveillance has a chilling effect on journalism, as it undermines trust towards them and limits the willingness of sources to cooperate for the sake of bringing to light matters of public interest. In other words, “If journalists can’t protect their sources, investigative journalism is finished.”

All this poses the dilemma of freedom of expression and security and how these two issues are opposed to each other. Striking the right balance between these fundamental human rights and the need for governments to protect their citizens presents a daunting challenge for policy makers, civil society, news media, and, in the end, just about everybody. Just because technology makes surveillance possible, it does not mean it makes it necessary or justifiable in all cases. As the report suggest, one approach to solve this paradox lays in the demand for a set of standards, which perhaps could be applicable internationally, based on three pillars: Transparency, Oversight and Proportionality.

Watchdogs Under Watch: Media in the Age of Cyber Surveillance is a joint publication of Radio Netherlands Worldwide (RNW) and the Center for International Media Assistance.