What Can Be Done? Digital Media Policy Options for Strengthening European Democracy

This report identifies some policy options able to create an environment that is more conducive to independent professional journalism, demonstrating what democratic digital media policy could look like with freedom, funding, and a future 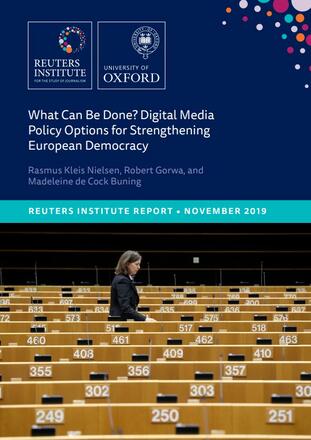 According to the introduction, “independent professional journalism plays an important role in democracy, but it faces a number of important challenges that threaten that role and, by extension, threaten European democracy”.

The three above mentioned conditions come in order of priority: the authors stress that “without freedom, no amount of funding or investment in the future will ensure independent professional journalism”.

The first step of the suggested options should be to address the implementation gap between what elected officials have committed to on paper and what governments do in practice.

The second step could be to link access to EU funds to performance in an annual rule of law review that includes a focus on free expression and media freedom.

According to the study, the three most promising policy responses are:

(a) reform and potential expansion of existing forms of support for private-sector media;

(b) recognition of the role that genuinely independent, adequately funded, public-service media operating across all platforms can have;

(c) rapid reform to ease the creation and funding of non-profit news media.

Media literacy projects, oversight mechanism, and data access can be important tools. “We have not identified a silver bullet, and indeed, we do not believe there is any”, authors confirm. “Those looking for an easy solution will not find it”. A more holistic approach is welcome. “It is the time to discuss fast and listen quick”.