This report analyses the weaknesses in the protection of whistleblowers in Italy, where the transposition of the European Directive is still lacking and the issue is regulated by a law that grants a lower level of protection (Law 179/2017) 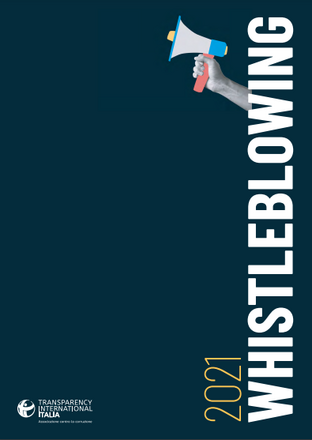 Italy should have transposed the European Directive by 17 December 2021, but no progress is still registered.
The report found major shortcomings with regard to the protection of whistleblowers in terms of discrimination: there are very few sanctions against those who break the law, as well as very few measures by the judiciary in favour of whistleblowers.
There are at least 1,500 entities that have joined Transparency International Italia's ALAC alert platform. In 2021, the ALAC team received 23 alerts, and the highest number was found in Lazio. In contrast to previous years, when anonymous reports were higher than confidential ones, this year there is a reversal. In 2021, alerts mainly concerned the area of appointments and recruitment. In line with previous years, there is a high number (61%) of cases with a local impact. However, there are also as many as four cases of international relevance.

Although Italy has not yet transposed the EU Directive, there is a duty not to put in place internal measures that could undermine its objectives. Furthermore, and although the directive is not directly applicable within national legal systems, it is nevertheless capable of producing a number of effects. First, individuals are able to benefit from the provisions laid down in the Directive where those provisions are sufficiently clear and precise. Second, a Member State that does not comply with a Directive is liable for the damage caused, a liability that results in an obligation to pay compensation. This scenario applies as of 18 December 2021.

The report then examines the cases of whistleblowers in international organisations, in particular in the United Nations. In recent years, there have been several cases of whistleblowers in the UN who have suffered retaliation. As a result of their claims, they have lost promotions, been denied contract renewals, been harassed by colleagues and sometimes been fired. To prevent retaliation against whistleblowers working in the United Nations, the Joint Inspection Unit and the Government Accountability Project in 2020 proposed a series of recommendations.

Finally, a chapter is dedicated to SLAPPs. Strategic lawsuits against public participation aim to prevent investigations and the reporting on corruption and violations of the rule of law. The issue of SLAPPs is of great importance not only in the field of journalism. It is also relevant when it comes to whistleblowers. Indeed, the mere threat of a lawsuit might discourage the whistleblower from exposing him or herself. On the other hand, SLAPP is an additional retaliation measure that could make the burden unbearable.
SLAPPs are on the rise throughout Europe. Establishing minimum standards against them is crucial for the fight against corruption, both at a national and cross-border level.
In conclusion, the authors emphasise the importance of the work of the CASE coalition and national working groups on SLAPPs.