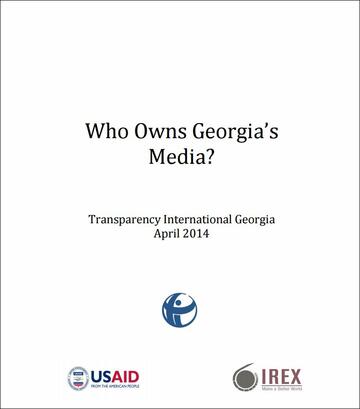 Released in April 2014, this report by Transparency International (TI) Georgia provides a detailed analysis of the media ownership structure in Georgia, discussing the background, connections and corporate interests of media owners.

The report updates the information regarding the ownership of major media outlets by also including the ownership issues of online media publishers. To date, no thorough research into Georgian online media has been produced, while the impact of news websites on the public opinion grows as internet penetration increases.

The political polarization which exists in the country also impacts on media outlets: several cable and internet outlets appear to be owned by anti-Western and religious organizations, raising questions about their independence.

A second report by TI Georgia examines the ownership of regional media outlets, their role and funding. Regional media outlets play an important role in shaping discussions in Georgia’s towns and villages. Their significance has further increased after the local self-governance reform, as a result of which mayors in 12 cities were directly elected.