A detailed study released by Transparency International looks at the ownership, operations and financing of local media outlets in Georgia 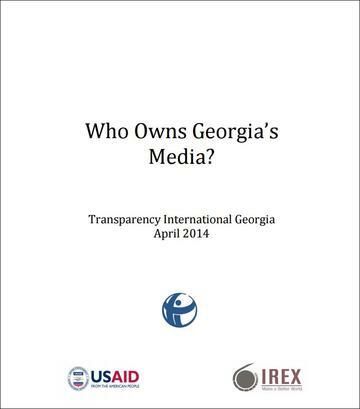 This report is the second part of TI Georgia’s large scale research Who Owns Georgia’s Media?

The report considers the networks and corporate relationships that affect regional media outlets. The study moves from the consideration that regional and local media have a considerable impact, especially in times of local elections, when they prove equally influential as national media. This requires for the public to be informed about the media ownership structure and the existing ties between local media entrepreneurs, political and financial structures.

Among the main findings of the report, it is noted how ownership of Georgian regional media outlets is rather transparent. The authors did not find any cases where the identity of media owners was hidden behind offshore entities.

Concerning the structure of media ownership, there are only a few large businessmen who also have shares in the local Georgian media market, while for most of the regional media owners, media constitute their only business asset.

As far as direct political influence over media is concerned, politically active individuals do not directly or indirectly own, finance or control local media outlets. However, several owners of regional media outlets had links with the United National Movement (the main centre-right party and the largest opposition party in Georgia), and with local municipalities prior to the 2012 parliamentary elections.

With a sustainable level of market concentration, financial sustainability remains a key problem for regional media outlets. Local TV stations accounted for only 4% of all television revenues last year. Due to financial challenges local media outlets are not able to employ a large number of journalists. Two regional newspapers – the Armenian edition of Samkhretis Karibche and Kartlis Khma closed down in recent months due to a lack of financing.