Why Does Junk News Spread So Quickly Across Social Media?

This white paper by the Knight Foundation explores the spread of junk news around the world by examining the relationship between social media and democracy and by discussing the role of algorithms, advertisements and selective exposure in filtering and delivering content 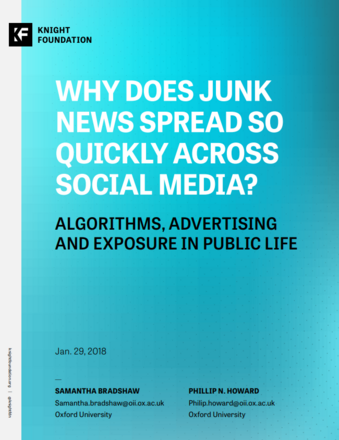 The white paper Why Does Junk News Spread So Quickly Across Social Media? - Algorithms, Advertising And Exposure In Public Life  explores the spread of junk news around the world. The report is comprised of three sections. The first section examines the relationship between social media and democracy, while the second section provides some examples regarding the influence of social media in recent political developments. The final part discusses the role of algorithms, advertisements and selective exposure in filtering and delivering content. The analysis is concluded with some ideas for how social media platforms should design for democracy and how governments should regulate it.

Social media has become an increasingly prominent source of information that users consult in the process of forming opinions. At the same time it has transformed the ways in which users relate to news and political content. Social media empower users to share the role of gatekeepers of information, by giving them the possibility to pull content that is relevant to them. The study points out the various aspects of this kind of empowerment.

On the one hand, it affirms that the free flow of information allowed microblogging and citizen journalism to have a positive impact on free speech and democracy. Traditional media and broadcasting organizations no longer have monopoly over news and information about politics. Citizen journalism has helped to fill some important information gaps by drawing attention to issues that have not been picked up by mainstream media. For example, the #BlackLivesMatter movement is one of the issues that acquired visibility thanks to social media, with "the force of a few thousand retweets” contributing to realise a “push back against spurious media narratives". The positive role that social media played in transforming regimes across the Middle East has been also examined by some scholars. Others have drawn attention to the Occupy Wall Street movements, where social media were used to coordinate political protests across the United States.

However, on the other hand, social media seem also to have negative consequences for public life.

Firstly, "most of the content shared over social media is rarely about politics". When this is the case, citizens rarely use social media for substantive political conversations and the political content they engage with is often "anemic, uncivil or polarizing". Moreover, this engagement does not seem to translate to offline political impact.

Secondly, when major political events occur and online political conversations seem to increase, social media users tend to seek out and acquire knowledge that is favorable to their political preferences. Furthermore, according to recent research, communities rarely manage to translate their online activities to events with a strong off-line impact (such as attendance at public events, consumer activism, or other forms of grassroots engagement).

The spread of junk news over social media and its negative impact on democracy has been a matter of serious concern through 2016 and 2017, both in the U.S. and around the world. Several critics argued that disinformation about electoral candidates was misleading the attention of voters from important policy issues. Even the broader media agenda was influenced by the "coordinated efforts to spread 'fake news' stories" over the internet and social media, leading to the deepening of ideological divides.

The paper explains why and how the rise of social media has contributed to the spread of junk news, providing three main reasons:

- Algorithmic content curation has important consequences for how individuals find news and other important political information that is necessary for a healthy democracy;

- The spread of junk news is made possible through political bots, which are "algorithms that operate over social media, written to learn from and mimic real people to manipulate public opinion across a diverse range of social media and device networks”;

- Search algorithms that were once used for commercial and marketing purposes by individuals and companies are now used for political reasons. Social media platforms rely on algorithms to determine how news and content are disseminated and consumed;

- Political bots are active on several social mediaplatforms, including Twitter and Facebook, and are often designed to interact with users, boost the number of followers or retweets of a particular hashtag, person, or account, attack political opponents, or drown out activist  conversations;

- Complex algorithms that are at the base of social media platforms have been coded to sort, filter and deliver content in a manner that is designed to maximize users’ engagement with the content and time spent on the platform;

- Algorithms organise vast amounts of information produced and shared on social media by personalising content around user's interest and around the interests of people who have similar online habits and profiles. However this operation creates 'filter bubbles' that limit information flows and perpetuate bias. Moreover, the degree of outrage, confirmation bias or engagement provoked by the information circulating on social media seems to have direct consequences on its spread. But the speed and scale at which content “goes viral” grows exponentially, regardless of whether or not the information it contains is true.

- Social media accounts are "free" because individuals who sign up for their services pay with their personal information. The companies who buy this information craft and deliver microtargeted messages to those populations. This advertising model contributes to the spread of junk news in two important ways:

- it rewards viral content, which has given rise to clickbait. Clickbait is content designed to attract attention— often by stimulating outrage, curiosity, or both—in order to encourage visitors to click on a link to a webpage. This link often leads to an advertisement or to another website where paid advertisements are featured.  The websites's owner gets an income depending on the degree of the users’ interactions with the embedded advertisements. The "economy of clickbait" has also put transformative pressure on producers of news content to tell stories in a way that is click-worthy, fueling the rise of exaggerated, inaccurate, misleading and polarizing content.

- The second way that social media’s data-based advertising model contributes to the spread of junk news is by empowering various actors to microtarget potential voters, with very little transparency or accountability around who sponsored the advertisements or why. Political campaigns and foreign operatives have used social media advertising to target voters with strategic, manipulative messages. This is done through cookies, used to constantly track users’ navigation and activities across the internet and to help fine-tune political targeting and advertising techniques. This allows political campaigners to gather very detailed information about individual potential voters, and target them with a versatile arsenal of political communication and propaganda.

Individuals play also an important role in exercising their information preferences on the internet. Academic studies have demonstrated that people are more likely to share information with their social networks that conforms to their pre-existing beliefs, deepening ideological differences between individuals and groups. However, among scholars there is no full consensus on how this kind of “selective exposure” operates over the internet.

There are two main explanations for selective exposure. The partisanship explanation suggests that people pay attention to political content that fits an ideological package that they already subscribe to. The schemata explanationclaims that we take cognitive short cuts and depend on ready-made prior knowledge. The paper affirms that social media can certainly facilitate selective exposure, but likely through social endorsements rather than simply partisan frames. Indeed, social media users don’t pay attention simply because a piece of political news is from a credible source or generated by a political party. Instead, they pay attention in large part because someone in their social network signaled that the content is important by sharing or engaging with it.