Words that matter: a Glossary for Journalism in Cyprus

An OSCE trilingual guide that scrutinises which 'negative' expressions are commonly used by journalists in Cyprus, and their alternatives 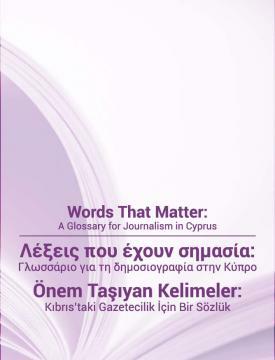 The OSCE Representative on Freedom of the Media supported the publication of "Words that matter: a Glossary for Journalism in Cyprus" in the framework of the 'Cyprus Dialogue' project launched in 2017. The glossary was curated by four authors representing one among the Union of Cyprus journalists, the Association of the Turkish Cypriots journalists, or Basın Sen, which cooperated under the leadership of Aidan White, president of the Ethical Journalism Network. The team examined the language that journalists use to tell their stories, both in Turkish and Greek, and detected 56 'negative' expressions that might contribute to the continuation of the conflict; when possible, the team provided jointly agreed alternatives.

The authors "are aware [that the publication] will be controversial as it is a result of compromises", thus it is important to remark what stated by Aidan White in his prologue, that is what the glossary is not: