A global report by UNESCO analyses the key trends in media freedom, media pluralism, media independence, and the safety of journalists at the global and regional level 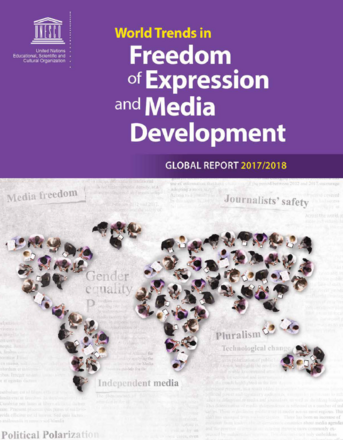 Each of the 4 chapters comprised in the report deals with the key pillars established by the 1991 Windhoek Declaration:

The report covers the period 2012-2017, marked by disruptions related to political upheavals, radicalisation, and violent extremism, with a negative impact on media freedom. The study is based on regional analysis and presents changing patterns in freedom of expression and media development, with progress registered in certain areas and regression in others.

The first chapter, titled media freedom trends, describes key legal and regulatory dimensions of media freedom and summarises the main global and regional trends that took place in 2012-2017, when rapid transformations in media structures were accompanied by the accelerating spread of new technologies and the increasing role of large internet companies. These developments led to the transformation of traditional media regulation methods, increasing the role of actors such as international bodies, governments, cross-national tribunals, and civil society.  The study points out the assertion of state power in media affairs and the transformative impact of powerful internet companies. The continuing salience of news media institutions is also underlined as the very definition of journalism continued to be examined and expanded. Technological advancements - which did not progress uniformly across regional, gender, digital, and other divides - were used both as a means to enhance media freedom and a potential instrument of surveillance, or even coercion.  Overall, despite progress made with regard to legal guarantees to seek and receive information, media freedom appears to be limited by a number of legal restrictions on the right to impart information and ideas.

The second chapter of the study examines media pluralism trends at the level of access, economic models, content diversity, and gender in media. The report shows that despite the variety of sources of information, the concentration of ownership of media companies and internet services raises significant concern. On the one hand, it is indeed possible to find multiple kinds of information and broadcasts. On the other hand, each group seems for the most part to access only a limited range of options. This trend, called “polarised pluralism”, is more apparent where internet penetration and the reliance on online sources for news is the highest. The phenomenon is largely related to the increasing use of algorithms to sort through increasingly abundant information, and to rank search results and social media news feeds. This also affects traditional media - newspapers above all - which have been unable to reap the benefits in the increasingly profitable market in digital advertising and have been struggling to compete with other content, including ‘fake news’. Overall, the trends analysed in this chapter show that media pluralism remains inhibited in important ways: disempowered and marginalised groups continue to have great difficulty reporting their stories or having their stories fairly reported on, large numbers of people remain digitally unconnected, and women remain unequally represented in the media.

Media independence, the topic of the third chapter, is under increased pressure, due to complex interconnections between political power and regulatory authorities, attempts to influence or de-legitimise media and journalists, and shrinking budgets in news organisations. The study underlines the need for independent and professional journalism that is able to provide verifiable information as a common content currency to serve effective and open public debates.  In this sense, some positive developments are mentioned in the study: increase of journalistic autonomy in some regions; emergence/enhancement of alternative and often influential outlets for journalists, including on digital media, as well as international investigative journalism collaborations; and journalism education initiatives aimed at reinforcing independent professional standards.

As for the trends in the safety of journalists, the report underlines that  “across the world, journalism remains a dangerous profession”. This is supported by the data presented in the study. As a matter of fact, during the years covered by the report, there has been an increase in the frequency and regularity of harassment and violence directed towards journalists compared to previous years, most significantly in the number of journalists killed while carrying out their work. Africa, Latin America, and Arab and Caribbean regions have seen an increase in the number of journalists killed while doing their job. Killings of women journalists increased during the same period, with the Arab region proving the deadliest, followed by Africa. Overall 530 journalists - for the most part local people - are reported to be killed in 2012-2017. Other forms of violence against journalists include kidnapping, enforced disappearance, arbitrary detention, and torture, and they are reportedly growing in some regions.  Impunity for crimes against journalists is still widespread. As for the digital safety of journalists, it is undermined by surveillance and hacking from state and non-state actors, while online harassment—especially of women journalists—has been increasingly reported. A way to contrast these trends is exemplified by the framework of the UN Plan of Action on the Safety of Journalists. Progress is said to be made also on the issue of impunity, due to the collective action of  intergovernmental organisations, media, academia, and civil society groups.