Another issue of our guides to the database of the Resource Centre, to help users navigate and understand what is available and where to find it. This directory is based on OBCT research about women journalists and their special needs for support, and gives an orientation among EU measures and support centres run by ngos. Also available as a pdf 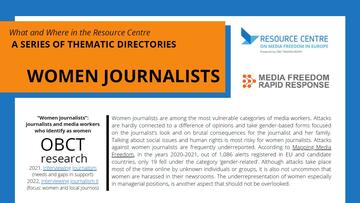 What and Where in the Resource Centre

Women journalists are among the most vulnerable categories of media workers. Attacks are hardly connected to a difference of opinions and take gender-based forms focused on the journalist’s look and on brutal consequences for the journalist and her family.
Talking about social issues and human rights is most risky for women journalists. Attacks against women journalists are frequently underreported. According to Mapping Media Freedom, in the years 2020-2021, out of 1,086 alerts registered in EU and candidate countries, only 19 fell under the category ‘gender-related’. Although attacks take place most of the time online by unknown individuals or groups, it is also not uncommon that women are harassed in their newsrooms. The underrepresentation of women especially in managerial positions, is another aspect that should not be overlooked.

In the database of the Resource Centre there are 79 matches under the topics Gender in media (57) and Gender issues (22).

The commitment to the protection of women journalists in Europe

EU institutions and the Council of Europe are increasingly acknowledging the need to pay a particular attention to threats against women journalists and to create a safe environment, both on and offline.

Among the measures taken:

"Journalists are targets of harassment, hate speech and smear campaigns, at times even initiated by political actors, in Europe and beyond. Female journalists are particularly targeted"

"Dedicated guidelines, activities and projects should be developed to strengthen the position of women in the media, both as experts and as journalists, and to address gender inequalities"

Emergency fund for legal and medical bills; legal aid to counter threats of imprisonment or censorship; three months of temporary relocation assistance; small grants for psychological and medical care for incidents directly related to threats and crises caused by their work.

Coalition for Women in Journalism (CFWIJ)

Mentorship program and advocating for a safe and flourishing professional environment; creating spaces for women journalists where they can be nurtured, stay safe, and expand their
skills. The Coalition follows any case of violation that women journalists face.

International Association of Women in Radio and Television (IAWRT)

IAWRT is committed to promote women’s role and participation in media. It organises conferences and training activities and carries out research. It is a network of 14 national chapters and members in 54 countries.

Support for women journalists and writers that are victims of online harassment. TrollBusters provides tools and services such as personal endorsements, just-in-time coaching, training and reputation repair services to support victims of online abuse or other troll behaviour.

Italy. Democratic, antifascist, and solidaristic manifesto. It has two main goals: to change information imbalance about women, also using a language without stereotypes, and to fight for equal job opportunities for women.

France. Advocating for fair representation of women in the media and professional equality in newsrooms. The network provides support to women facing discrimination and harassment
through a support platform .

A helpline and solutions laboratory for women journalists, activists, and women’s rights defenders. Responders are trained in psychological first aid, conflict resolution, and strategic thinking work to build solutions tailored to their cases.

Providing advice to women and non-gender binary people working in news. Facilitating conversations with mentors who might otherwise be hard to find.