Slovenia: a letter to EU Presidents 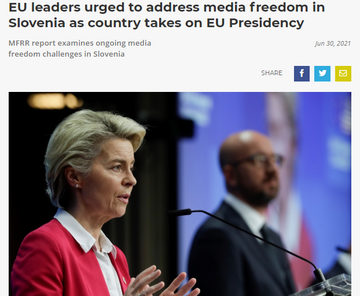 President of the European Council

President of the European Commission

President of the European Parliament

On the eve of the assumption of the Republic of Slovenia of the Presidency of the Council of the European Union we are pleased to share with you a report produced by the Media Freedom Rapid Response (MFRR), a consortium of media freedom and freedom of expression organisations, following our recent mission to Slovenia.

The report: Press Freedom Deteriorating in Slovenia under Latest Janša Government  details how the current government is overseeing an increasingly systematic effort to undermine critical media by reshaping the media landscape in favour of a pro-government narrative.

The front line of this campaign is an aggressive attempt to seize greater control of the country’s public service broadcaster (RTV SLO) and Slovenian Press Agency (STA).

The declaration earlier this week of an offer to resolve the dispute with STA and release the funds that the agency has been starved of since January comes with heavy conditions that will grant significant new powers to the Government Communication Office (UKOM) to monitor the financial administration of the agency, a responsibility that was previously held by STA’s supervisory board.

Prime Minister Janša, backed by politicians from his Slovenian Democratic Party (SDS), is also responsible for stoking the toxicity of public debate and the smearing of leading critical journalists as part of a programme of intimidation and delegitimization of critical journalism attempting to hold the government to account.

Since assuming office in March 2020, the SDS has used its position to redirect public funds towards its partisan media which is further propped up by heavy investments from media linked to Fidesz in Hungary, where the practice of state-led capture of the media has been refined over the past decade.

On behalf of the Media Freedom Rapid Response we ask you to raise these issues with the Slovenian Government, to take measures that can effectively counter the assault on media pluralism that we are witnessing in Slovenia, Hungary and Poland and to ensure that the Presidency is not abused to further erode media freedom.

This letter is part of the Media Freedom Rapid Response (MFRR), a Europe-wide mechanism which tracks, monitors and responds to violations of press and media freedom in EU Member States and Candidate Countries.