Interviewing Journalism II. Needs and gaps in support for women and local journalists

As part of the Media Freedom Rapid Response, OBC Transeuropa published a new needs and gaps analysis building on the findings of the research carried out in 2021. The study, conducted by Maria Francesca Rita, focuses on the needs of women and local journalists and the gaps in the existing support mechanisms 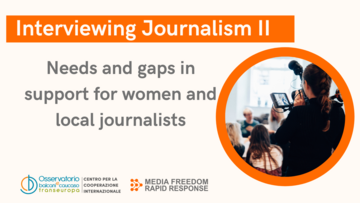 At the European level, there is a need to focus on women journalists and local journalists as among the most vulnerable categories of media workers.

Women journalists are often more exposed and vulnerable to threats than their male colleagues, and this is true especially online. Attacks are hardly connected to a difference of opinions on a given issue, taking specific and gender-based forms focused on brutal consequences for the journalist and her family, and/or focus on the victim’s looks and use sexist stereotypes. Although no topic is completely free from harmful reactions, talking about social issues and human rights, including for instance migration and gender issues, is most risky for women journalists. A worrying trend of underrepresentation of the attacks against women journalists is registered. Attacks are frequently underreported, often for fear of professional retaliation.

Although many newsrooms are active in the protection of their journalists, it is not rare that a woman journalist is moved away from a topic when receiving attacks as she is perceived as “incapable” of dealing with the consequences of her work. Moreover, although attacks take place most of the time online by unknown individuals or groups, it is also not uncommon that women are harassed in their newsrooms.

It is essential for newsrooms to adopt gender-sensitive policies, first of all to raise awareness among the colleagues of the condition in which women journalists work. Together with support centres, unions, and policymakers and with the support of social media and big tech companies, it is necessary to enable a working environment for women journalists equal to that of their male colleagues.

The other focus of this research is local journalism. The attention that institutions pay to the local dimension has been slowly growing in recent years, particularly in relation to the effects of the pandemic. While local journalism is going through a crisis due to its precarious economic situation, it serves a fundamental purpose for communities. Local journalism is indeed a more and more important reference point for the individuals who, through a sense of attachment to a community, keep their identity in a world increasingly globalised. Moreover, local journalists play a crucial role in difficult local contexts where the intertwining of criminal organisations, the business world, and local administrations is particularly intricate. In this case they are full-fledged human rights defenders committed to exposing the improper conducts that have a strong negative impact on the livelihood of the communities themselves.

Local journalists are therefore particularly exposed to threats and attacks. Given the fact that they are well-known in their community, there is less of a buffer with the local public which, while an advantage for obtaining information, could also mean higher exposure to attacks. This exposure is lower on social media, where journalists have less visibility than their colleagues working for national, mainstream media. Their lower visibility means however a difficulty to be protected.

Due to this particular vulnerability, local journalists are in dire need of support. Public authorities appear less prepared in this sector, while support centres and
unions tend to be more active in bigger cities, overlooking the single little episode that happens on the territory.

Building on the findings of Interviewing Journalism, this report moves towards a targeted analysis with the development of four case studies: Bulgaria, Ireland, Italy and Sweden.