Needs and Gaps Brief No. 3: Bulgaria 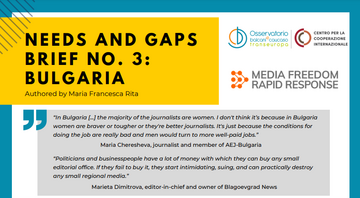 Journalists in Bulgaria are under enormous pressure. A delegitimation process of the role of independent journalism is in place in the country, with a detrimental effect on the already low level of trust of the public. The severe issues undermining media freedom and the safety of journalists in the country include lack of transparency of media ownership and of allocation of state advertising and public funding.

The climate in which women journalists operate is part of a wider context of systemic sexism, exemplified by the country’s failure to ratify the Istanbul Convention. Women are not underrepresented in the news production. However, this does not mean they are not discriminated against, as there is a lack of gender-sensitive policies in media organisations. Pay is often lower, and women journalists are often the first to lose their jobs in difficult times. Women journalists are particularly exposed to threats and attacks when reporting on issues related to human rights.

The Covid-19 pandemic has further deepened the financial crisis of local and regional media. Political independence of the media in Bulgaria is under threat at all levels. However, local and regional media are particularly at risk due to their strong dependence on funds coming from municipalities and local owners. The low level of pay outside Sofia makes journalists much more vulnerable to pressure mechanisms.

This brief is part of our needs and gaps analysis, which will be available soon. Last year's publication is available here.