Needs and Gaps Factsheet No. 2: Ireland 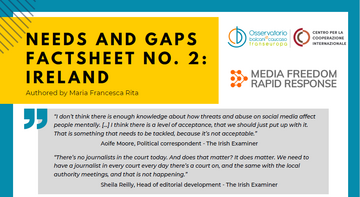 The biggest concerns for journalists in Ireland include digital safety and the defamation law.
Women are underrepresented in the media industry, accounting for only a third of media professionals. Covering gender-related topics is especially dangerous for women journalists. The abortion referendum in 2018 was one of the hardest topics to report about. One of the biggest threats that women journalists face in Ireland is online harassment. Social media brought a new threat to women journalists. Social media companies’ unwillingness to back journalists in cases of online harassment and defamation is another very serious issue.

The local dimension of journalism is not extensively developed in Ireland. One of the biggest threats to the independence of the local media environment is the high level of ownership concentration. Local newspapers are more vulnerable to the destructive effects of defamation laws. Local media have to be so cautious that they tend not to cover sensitive stories. Local journalists are very well-known in their community, but have less visibility on social media. However, not being in the spotlight might be a risk for local journalists who are harassed online.

The decrease in the number of freelance journalists is another serious issue at the local level. The economic condition of national newsrooms makes it not profitable to have local correspondents. However, it is hard to find even a freelance reporter in some counties, and this means that if something happens in an area and the only journalist who covers that area does not know about it, it is like it never happened. Local freelancers almost entirely rely on national outlets that need a story from that area from time to time, but this makes their profession extremely unstable.

This factsheet is part of our needs and gaps analysis, which will be available soon. Last year's publication is available here.