A limited selection of cases from an ocean of lawsuits. A paper sent to the INI rapporteurs of the Draft Report on the strengthening democracy and media freedom and pluralism in the EU: the undue use of actions under civil and criminal law to silence journalists, NGOs and civil society 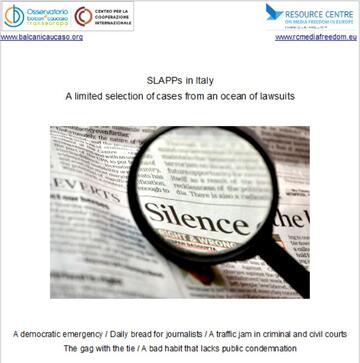 Here the pdf version of the factsheet.

Thanks for their contribution to:

Giuseppe Giulietti, president of the FNSI

and Claudio Silvestri, secretary of the regional journalists Union of Campania SUGC

For a detailed analysis of the Italian situation, we can refer to Chapter 5 of our special dossier about SLAPP, published in December 2019. The dossier, written by Claudia Pierobon and Paola Rosà, kindly reviewed by Charlie Holt (GP), includes definitions, historical background, legislative analysis in Europe and a special focus on Italy and the situation of journalists.

Defamation lawsuits filed according to the Criminal Code (art. 595) or to the Press Law (law 47/1948), and civil claims for damages to the reputation or for other types of damages, are a daily occurance for journalists in Italy and a severe threat to freedom of expression for activists and human rights defenders.

According to the official data of the National Statistics Service ISTAT, available numbers are grouped according to the crime and to the legislative source they refer to.

The table shows the data clearly referred to journalism.

Another cathegory of the ISTAT table groups data related to a comprehensive definition of defamation, i.e. cases of defamation filed according to art. 595 of the Criminal Code: this group is very difficult to be interpreted, as these cases do not only refer to freedom of expression or to journalism. Article 595 includes 4 kinds of crime, such as 1) “simple” defamation, 2) defamation with accusation of fact, 3) defamation through the press, and 4) defamation of state institutions; therefore, this second collection doesn't allow to see a clear picture. We can report these numbers here, anyway, just to give an idea of the “traffic jam” in Italian courts: in 2017, 15,220 defamation lawsuits were filed according to art. 595 of the Criminal Code, and 11,350 cases were dismissed.

The intimidation is in the announcement, too

The President of the Italian Journalists Union (FNSI, Federazione Nazionale Stampa Italiana) Giuseppe Giulietti confirms (May 2021) that nobody has exact numbers. Still, there is a distinction to be done, the one between announced and filed lawsuits.

“We have to distinguish between threatened, simply announced lawsuits, and those cases where lawsuits are really filed”: this is a distinction to be done for statistics. However, the general impact on freedom of expression and the direct impact on the activity of journalists seem to be the same.

According to Giuseppe Giulietti, an interesting example is the high number of lawsuits “promised”, that is announced through the media, by Italia Viva, the party of former Prime Minister Matteo Renzi: “No news of the many lawsuits announced by Italia Viva”, confirms the President of FNSI.

The threat is in the quantity and in the amount, too. But not only

Investigative journalists are the preferred victims of gagging lawsuits. They are sued by politicians, often local public officers, and members of organized crime. 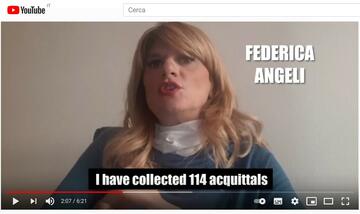 Federica Angeli has so far collected 167 lawsuits, and 150 of those have been either dismissed by a judge or she has been fully acquitted in a trial.

These numbers picture a threatening landscape in growing dimensions: just a few months ago, when Federica Angeli recorded this video for Festival Imbavagliati and OBCT, she talked of 114 acquittals out of 130 lawsuits collected in 25 years of activity as an investigative journalist.

Her personal archive is richer and richer.

Another quite rich archive belongs to the tv show Report:

according to the latest data provided by FNSI, the investigative tv show has been sued in more than 150 cases, either with a criminal defamation lawsuit or with a civil claim for damages.

The issue is not new at all: in 2013, the then anchorwoman Milena Gabanelli talked of around 60 claims for damages and a dozen defamation lawsuits, for a total of 300 million Euro in claimed compensations.

In the meantime, trials have been completed, new lawsuits have been filed and Report was only condemned once, for a mistake in publishing a picture.

Some examples of the cases involving Report:

The present anchorman Sigfrido Ranucci says that many politicians prefer to immediately file a lawsuit instead of answering questions, because procedural costs in Italy are really low: "Until our system is so cheap and you can file a lawsuit and claim for damages at such a low cost, I think democracy will continue to be gagged for ever".

Years lost in court dealing with lawyers and expenses

Acquittal and dismissal are the most common “happy ending” of defamation lawsuits hitting journalists in Italy. What happens in the meantime is what makes the difference for the journalist's health, reputation, career and wealth.

Another story of acquittal comes from Trapani, a town in Sicily: Giancarlo Guarrera, general manager of Airgest, the society managing the airport, had sued the local newspaper “Locale News” asking for a million Euro compensation, just because the outlet had written about the increase of wage decided by Guarrera. After 4 years, the court acquitted the journalist and condemned the plaintiff to pay legal expenses. “We welcome this decision that goes in the right direction – this was the comment of the local journalists' union Assostampa – these attempts to gag and intimidate journalists with millions of Euro of damage claims are a damage to democracy”.

SLAPPs are seen as a threat to democracy by the Order of Journalists, the Italian professional Chamber: in his message to the Prime Minister during the joint press conference for the end of 2018, the president Carlo Verna said: “SLAPPs (literally he said: iniziative giudiziarie temerarie, i.e. wreckless legal actions) gag media freedom, and are a real limit to the right to inform and to be informed. They are a democratic emergency”.

Lengthy trials contribute to worsen the situation for journalists and human rights defenders waiting for a decision by the court. Civil trials can sometimes be much longer than criminal ones.

This is what happened to Antonella Napoli, who was has been sued in 1998: even if the criminal trial was ended and she was acquitted, the civil case is still pending, and the heirs of the plaintiff (who died some years later) are still demanding damages from her. They have been keeping her hostage of a trial for more than two decades.

A tool in the hands of organized crime

According to a report by AGCOM, the Italian Authority on Telecommunications, there seem to be a geographical overlap between territories with a high level of criminality and those where courts are busy with SLAPPs.

This has been confirmed to us by Claudio Silvestri, secretary of the regional journalists union of Campania, the region of Naples: “We have a helpdesk to support colleagues who are sued, and in most cases these lawsuits are meritless, they are just a way to intimidate the reporter. I have been sued three times, myself, for my activity in the union”.

One case supported by the helpdesk of SUGC, Sindacato unitario giornalisti Campania is the story of a journalist who has been sued in around 10 criminal proceedings for defamation in the last 10 years and was never condemned. One case is still pending (the lawsuit was filed 3 years ago), 4 have been dismissed the following year, 1 has been dismissed after 3 years and another one after 2 years; one trial lasted 6 years and ended with his acquittal, and another trial ended quite soon with a dismissal of the case.

Claudio Silvestri confirms that this is the most frequent pattern that applies to investigative journalists in his region, in the town of Naples and sorroundings.

In Sicily, it took 3 years to dismiss the lawsuit filed against the journalists of the monthly newspaper “S”: in 2019, the judge for preliminary investigations of the court in Palermo dismissed the lawsuit, considering that the reportage published by “S” in 2016 was written implementing the “legitimate right to report”, that the criterium of “truth” was respected and that all this was in the public interest. Besides, the judge added that the journalists never used an offensive language, and always “exposed facts in a neutral manner”.

But the journalists and the publisher were busy with lawyers and hearings fot three years.

It took longer for Claudia Fusani, a journalist of L'Unità, to be acquitted in 2017: 7 years after the lawsuit, a decision of the Court of Cassation confirmed that the publication of a picture was justified by the public interest and was done respecting the right to inform and to be informed.

Talking of money, a 10-million-Euro request was filed in a civil case by Cardinal Becciu: he wants to be compensated for alleged damages to his career as a possible pope-to-be and accuses the weekly newspaper L'Espresso to have ruined his career. The investigative magazine is not new to such requests: his journalist Nello Trocchia was sued for 39 million Euro by a company providing university training and degrees. The request was filed by Pegaso and more than 100 plaintiffs.

Italian courts host cases that involve foreigners, too, like for example the pesticide trial in Bozen, where a local politicians and more than 1300 farmers are suing an Austrian documentary filmmaker and a German environmental activist.

An exhaustive monitoring of cases of meritless or vexatious lawsuits seems impossible.

Helpdesks implemented by the FNSI and its different regional units could be a valuable source of information and data. Besides, the ngo Ossigeno per l'Informazione does a good service in reporting about cases, offering financial support and publishing reports.

But real numbers are far from being fully recorded.

This was just an arbitrary selection, it is just the tip of the iceberg.

This selection was submitted to the rapporteurs of the INI Initiative Report about SLAPP.