A call on UK authorities to intervene on behalf of whistleblower Jonathan Taylor, stuck in Croatia 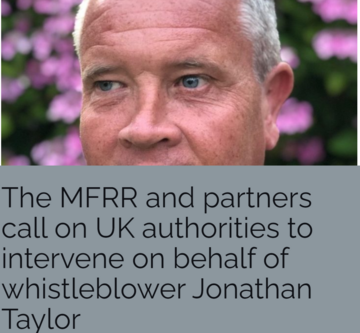 We, the undersigned Media Freedom Rapid Response (MFRR) partners, whistleblowing, human rights and transparency organisations, are concerned that without intervention by the government of the United Kingdom, whistleblower and British citizen Jonathan Taylor may be stuck in Croatia fighting extradition to Monaco for many more months.

On 31 July 2020, Taylor, a whistleblower who disclosed bribery and corrupt practices in the oil and gas industry, was arrested upon his arrival in Croatia for a holiday pursuant to an Interpol Red Notice issued on request of Monaco. On 1 September, a court in Dubrovnik ordered his extradition. However, on 12 October the Supreme Court partially sustained an appeal by Taylor, ruling that, as the extradition concerned a UK national, that country should be afforded the right to request Taylor’s surrender under the European Arrest Warrant (EAW) scheme.

If the UK does not seek his surrender, the Supreme Court said, the lower court should rule on the request for extradition by Monaco. On 20 October, the court in Dubrovnik wrote to the UK authorities requesting a statement as to whether it seeks Taylor’s surrender under the EAW, which would be absurd given he is not under investigation in the UK.

Previously, the Foreign, Commonwealth and Development Office (FCDO) has stated that it is unable to act in Taylor’s case, with reference to a policy against interfering in the independent judicial system of a foreign state. Besides seeming disingenuous in light of the Government’s – welcomed – intervention in some other citizens’ cases abroad, this is a decidedly thin argument when there is a risk of an abuse of process and denial of justice, even more so now that the UK has been directly invited by the Croatian courts to make a statement with respect to Taylor’s case.

We urge you to step up and intervene on Jonathan Taylor’s behalf, to make it clear to the Croatian Court and Ministry of Justice that the UK is not seeking Taylor’s extradition through a European arrest warrant because he is not under investigation nor should he be; that Jonathan Taylor is a whistleblower and a protected witness in an important corruption case.

In 2014, Taylor blew the whistle on a $275 million international network of bribes paid by his former employer, the oil platform company SBM Offshore, to secure oil contracts around the world. The evidence he provided to the UK Serious Fraud Office, and investigators in Brazil and the Netherlands as well as the FBI and the Department of Justice in the United States, helped ensure SBM Offshore was fined over $800 million. Notwithstanding the evidence of wrongdoing available to the authorities in Monaco, where SBM Offshore is headquartered, the company has never been investigated for wrongdoing in that country.

Instead, the Monegasque authorities accepted, and have continued for six years to pursue, a criminal complaint filed in 2014 against Taylor by SBM Offshore accusing him of bribery and corruption. Despite the case being rejected by a Monegasque court two years ago, it was reinstated and earlier this year, Monaco requested an Interpol Red Notice that resulted in Taylor’s arrest at Dubrovnik Airport on 31 July 2020. Released on bail five days later, today Taylor has spent over 3 months in limbo unable to leave the country, forced to fight for his freedom through the Croatian legal system.

We ask that the UK Government intervene on Jonathan Taylor’s behalf now, so he can, at last, come home.