Academic Autonomy and Freedom in Turkey: The Case of Boğaziçi University

Academics for Peace NA cordially invites you to the webinar "Academic Autonomy and Freedom in Turkey: The Case of Boğaziçi University" on March 4 at 6 pm (CET) with a vibrant group of speakers, co-hosts and sponsors 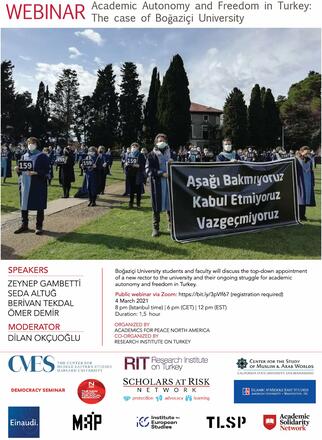 The situation in Turkey is changing day by day. As reported by OBCT journalist  Arzu Geybullayeva on 18 February, for 45 days students and academics at Istanbul’s prestigious university Boğaziçi have protested the appointment of new rector Melih Bulu, a member of the ruling Justice and Development Party (AKP). The protests began on January 4th, after President Erdoğan appointed Melih Bulu as the new rector of Boğaziçi University. While students have organised peaceful sit-ins on campus, faculty members have stood outside the rectorate for the last 45 days, their backs turned against the building. They all demand Bulu’s immediate resignation.

The Webinar organized by Academics for Peace (North America) brings Bogazici University students and faculty together to discuss the top-down appointment of a new rector to the university and their ongoing struggle for academic autonomy and freedom in Turkey.
Speakers:
Zeynep Gambetti
Seda Altuğ
Berivan Tekdal
Ömer Demir
Moderator:
Dilan Okçuoğlu