The European Centre for Press and Media Freedom (ECPMF), as part of the Media Freedom Rapid Response (MFRR), is concerned about legal proceedings initiated by Belioza Çoku, the Chief of Cabinet of the Minister of Defence, against journalist Juljana Ristani, who published a story on undue interference with lists of nominees for educational bursaries in thecontext of a public competition held by the Ministry of Defence 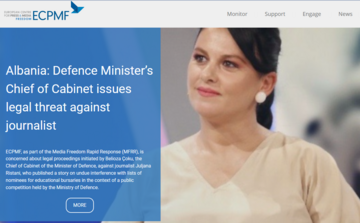 Prior to the article in question, Ristani had made public for the first time the ranking of the bursary applications. The leading candidate is expected to be awarded the scholarship. However, the leading applicant on this list was ultimately not successful, as the scholarship was awarded to another candidate.

There have been no complaints from the Minister of Defence questioning the authenticity of the list published by Ristani. The article that forms the basis of the legal action includes allegations that Çoku called and threatened the family of the leading applicant on the list late at night after they complained to the authorities. Çoku demands damages from Ristani for publishing “inaccurate and misleading data”.

In light of the fact that Ristani has clear evidence to prove her factual statements, we consider the public official’s legal threat against the journalists constitutes an attempt to intimidate her and hinder her work.
In addition to the case against Ristani, the MFRR recently documented abusive legal proceedings against BIRN and Artan Rama in Albania. The accumulation of such legal actions against journalists and media workers by powerful individuals, including policy-makers,  shows that Albania has a media and legal landscape that undermines the functioning of a free press and constitutes a broader threat to press and media freedom that interferes with reporting on issues in the public interest.
We call on the pursuers to drop their abusive legal actions. The courts must not be abused to stifle critical journalism that strengthens the public’s right to know and enhances democratic accountability.