Albania: an explosion in front of a journalist's home

In the middle of the night, on 30 October, explosives detonated at the entrance of Elidon Ndreka's home. International organisations call for quick investigations 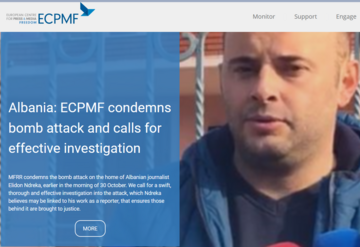 The European Centre for Press and Media Freedom (ECPMF), part of the Media Freedom Rapid Response (MFRR) condemns the bomb attack on the home of Albanian journalist Elidon Ndreka.

In a statement published that same day, ECPMF calls for a swift, thorough and effective investigation into the attack, which Ndreka believes may be linked to his work as a reporter, that ensures those behind it are brought to justice.

On 30 October around 1 AM, explosives detonated at the entrance of Ndreka’s home, which he shares with his wife, children and his parents. The explosion caused only material damage but left the journalist and his family shocked.

ECPMF and Media Freedom Rapid Response call on the authorities of Albania to ensure that this attack is investigated and prosecuted leading to the perpetrator(s) behind this attack being held to account, with the thoroughness and urgency the situation demands. In this regard, it is to be remembered that attacks on journalists and media workers affect not only the victims themselves but also the public’s right to information and the willingness of other journalists to continue their important work.

The call ends reminding that media freedom is central to the rule of law and a key condition for EU membership. In its most recent Progress Report, the European Commission said among other things that Albania should “ensure a policy of zero tolerance for intimidation and attacks against journalists” and found no progress in this regard, noting that “during the reporting period, no final convictions of past reported attacks against journalists were recorded.”