Strategic lawsuits are used to intimidate journalists, and ECPMF condemns the recent lawsuits filed in Albania by private companies 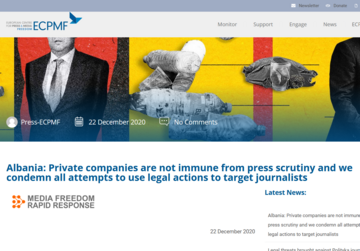 The continued use of legal threats in Albania against journalists and media workers further threatens media and press freedom and the ability to report on issues in the public interest.

As part of the Media Freedom Rapid Response (MFRR), the European Centre for Press and Media Freedom (ECPMF) condemns these attempts to silence critical reporting through the abuse of Albania’s legal system.

Amongst these threats is the legal action brought by the influential business owner Mirel Mërtit against the Balkan Investigative Reporting Network (BIRN), which investigated Mërtit’s controversial business practices and published stories on three major Public-Private Partnership contracts for waste incinerators. In response to BIRN’s investigative work, Mërtiri filed a lawsuit and demanded damages, while claiming that “journalists do not have a right to write or raise suspicions over his past dealing because he has not been criminally convicted”.

The lawsuit against BIRN was not the only threat to journalists connected to Mërtiri. Artan Rama, a freelance journalist and filmmaker, published a story involving the company Albtek Energy, which is connected to Mirel Mërtit. As a result of his reporting, Artan Rama faces legal actions initiated by Albtek Energy for damaging its reputation, which further jeopardise Rama’s reporting, while also dissuading others from investigating Mirel Mërtit and other influential business leaders.

As part of the MFRR, the ECPMF condemns these legal threats and calls on all pursuers to drop their legal actions as they explicitly threaten media freedom for all journalists in Albania. Legal actions should not be abused to stifle critical journalism that strengthens the public’s right to know and enhances democratic accountability.