Belarus: leaders of journalists’ organisations in Europe call on heads of governments to take action

Leaders of 50 journalists’ unions and associations in 34 European countries today called on their governments to intensify pressure and take action in the face of constant violations of human rights and press freedom in Belarus. In a joint letter, they urge their head of government to demand from the Belarusian authorities the immediate release of the 12 imprisoned journalists and the withdrawal of administrative and criminal proceedings against Belarusian journalists 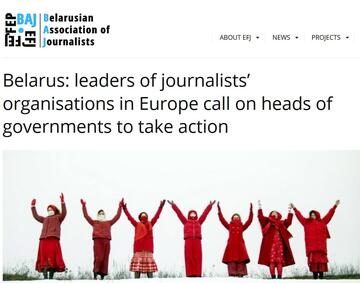 Thursday 25 March, known as Freedom Day, is an unofficial public holiday marking Belarus’ 1918 declaration of independence. This year, it is expected to be marked with nationwide protests. On 25 March activists around the world will hold protests outside Belarusian embassies and share messages of solidarity with peaceful protesters. BAJ has called for solidarity with Belarusians on this day.

The co-signatories of the EFJ-BAJ letter express their “deep concern about the intensification of repression in Belarus. (…) Today, there are over 250 political prisoners in the country, including 12 journalists. And this is just the tip of the iceberg. Since the fraudulent presidential elections of 9 August 2020, more than 30,000 people (including 480 journalists) have been detained, with many of them subjected to torture and ill-treatment, and over 1,000 people targeted by criminal prosecution.”

The full statement is published by EFJ .