The EFJ, EBU and SEEMO have all called for an urgent resolution to save the national broadcaster and its workers from financial ruin 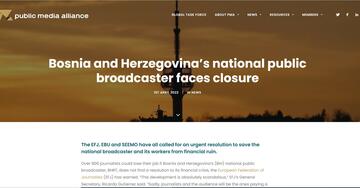 From an article published by PMA, public media alliance

Over 800 journalists could lose their job if Bosnia and Herzegovina’s (BiH) national public broadcaster, BHRT, does not find a resolution to its financial crisis, the European Federation of Journalists (EFJ) has warned. “This development is absolutely scandalous,” EFJ’s General Secretary, Ricardo Gutierrez said. “Sadly, journalists and the audience will be the ones paying a high price if BHRT closes.”

BHRT has experienced financial difficulties for a number of years. In 2016, BHRT was sanctioned from participating in the Eurovision Song Contest due to a €5.48 million debt they owed to the EBU as part of their membership. A recent report from ESCXTRA confirmed they were still unable to pay .

However, the financial difficulties have escalated in recent weeks, after the broadcaster was blocked from accessing its business bank accounts. “For years, with more or less success and in very difficult conditions, we are trying to fulfil our role in Bosnia and Herzegovina and abroad, but we are, unfortunately, brought to the wall and forced to make one last call for help,” the broadcaster said .

The blame for the financial trouble has been pinned to the regional broadcaster, the Radio-Television of Republic of Srpska. BHRT alleged that the regional broadcaster – which is responsible for collecting the licence fee from citizens – has not been passing on the 50 percent of the collected funds to BHRT as it is required to do by law. Consequently, BHRT said it now has a debt of 61 million KM (€31 million).

“Given the current situation, this could be the last blockade, a blockade that Radio Television of Bosnia and Herzegovina will not survive,” BHRT said.

“If this really happens, and there is no time to find a solution in the distribution of funds collected from the tax throughout BiH, BHRT cannot take responsibility for the situation in which Bosnia and Herzegovina will become the only country in Europe that does not have its own public service, although it is one of the main conditions on the road to joining the European Union.”

The broadcaster said they would not be able to continue to employ people while they were straddled with such debt and would have to close. It has called on the government to take responsibility and help them alleviate this debt.

There are serious ramifications if the broadcaster was to close. The Secretary General of the South-East Europe Media Organisation (SEEMO), Oliver Vujovic, argued that, “Its closure would create conditions for political manipulation and give additional power to some politicians and businessmen.” He added the closure would impact BiH’s efforts to join the EU.

The EBU has also called for direct intervention from the state to help the broadcaster. “According to Bosnia and Herzegovina’s legislation, the state has the responsibility to ensure the sustainable funding of public service media and its independent functioning,” said EBU’s Director-General Noel Curran.

PMA supports EBU, EFJ and SEEMO’s call on the BiH government to urgently address this situation. It must resolve BHRT’s current debt and from then on identify a long-term sustainable funding method. The closure of the national broadcaster would lead to serious consequences for democracy and society in BiH.