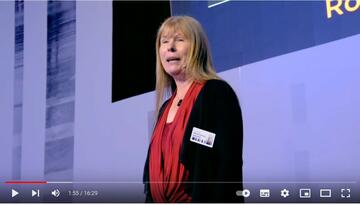 Screenshot from a video by Oslo Freedom Forum

This morning ARTICLE 19, Index on Censorship and Fair Trials wrote to INTERPOL to request clarification about whether a Red Notice or Diffusion has been issued against the British journalist, Clare Rewcastle Brown. The fourteen undersigned organisations would like to reiterate calls for INTERPOL to clarify the situation in order to ensure Ms Rewcastle Brown’s unrestricted entry to Spain later this week.

Ms Rewcastle Brown is the founder and editor-in-chief of the Sarawak Report and known for exposing high-level corruption involving the former Prime Minister of Malaysia (popularly known as the ‘1MDB scandal’). In 2015, the Sarawak Report published an article on the diversion of USD 700m into the personal accounts of the prime minister of Malaysia, Najib Razak. Subsequently, Ms Rewcastle Brown faced charges of 'activities detrimental to parliamentary democracy’, which formed the basis of a Red Notice request by the Malaysian authorities. In August 2015, Fair Trials wrote to INTERPOL expressing concerns that the Red Notice would likely violate INTERPOL’s rules. At the time, they took the unusual step of confirming that although a Red Notice request had been received, it was refused by the General Secretariat.

As of 23 September 2021, Ms Rewcastle Brown has been subject to a new arrest warrant in Malaysia. According to media reports, she is wanted over criminal defamation charges brought by the wife of the Sultan of Terengganu regarding statements made about her in Ms Rewcastle Brown’s 2018 book about the 1MDB scandal.

If a Red Notice has been issued, Ms Rewcastle Brown could be arrested when she travels to Spain later this week to visit an elderly relative who needs her support. There is also a risk that she could be held in detention and face extradition to Malaysia.

The undersigned organisations have serious concerns that the Malaysia National Central Bureau might be trying to use INTERPOL’s systems to judicially harass Ms Rewcastle Brown. The organisations are calling on INTERPOL to clarify whether there has been an attempt to issue a Red Notice or Diffusion by Malaysia, and whether such an attempt has been successful.

Clare Rewcastle Brown said: “These criminal charges are linked to a civil defamation case and my lawyers believe they represent an abuse of due process to put pressure on me as the defendant against a politically powerful litigant. When the original criminal complaint was brought in 2018 the police declined to action it. However, last month the political party behind the multi-billion dollar 1MDB sovereign wealth fund theft, which lost an election after I had exposed the scandal, returned to office.

“I am concerned that the same actors who tried to abuse Interpol by having me arrested as a terrorist in 2015 will, having returned to power, attempt to file another Interpol Red Notice alert with the aim of having me detained anywhere in the world. They are seeking to paint me as a criminal for exposing their corrupt practices which is my job as a journalist and they are using a claim of ‘criminal libel’ which is simply not a crime that exists in the UK or most democratic countries where the freedom of journalists to report on the politically powerful is rightly protected. I could be thrown into jail at a border by officials who have no idea about the background to this case or the spurious nature of these charges and then face months of legal action fighting extradition charges to get back to Britain.”

Bruno Min, Legal Director at Fair Trials said: “Some countries will go to extraordinary lengths to quash dissent, including by abusing INTERPOL Red Notices and Diffusions to harass and intimidate critics, wherever they might be. INTERPOL must send a clear message to the world that it will not tolerate the misuse of its systems as a tool of oppression by ensuring that journalists and writers like Clare Rewcastle Brown are protected from abusive Red Notices and Diffusions.”

Sarah Clarke, Head of Europe and Central Asia at ARTICLE 19 said: “This latest act of legal intimidation by the Malaysian authorities against Clare Rewcastle Brown is part of a pattern of serious judicial harassment against the journalist as a direct reprisal for her work in exposing massive corruption. INTERPOL must recognise this as a vexatious act of intimidation and ensure they are not complicit in the abuse of their system.”

Jessica Ní Mhainín, Policy and Campaigns Manager at Index on Censorship said: “It’s an indictment of international policing that a journalist travelling from one jurisdiction to another should fear an arrest for her work, which is overwhelmingly in the public interest. INTERPOL should take immediate steps to block any efforts by the Malaysian authorities to abuse its systems to harass Clare Rewcastle Brown, and ensure her unrestricted entry to Spain.”

Read the letter to INTERPOL here