Concerns about Hungary: the answer by the European Commission

Vice President for Values and Transparency Věra Jourová answers the letter that the Media Freedom Rapid Response partners had sent to European institutions at the end of July: to the concerns expressed after the resignation of 70 journalists and the dismissal of the editor-in-chief of an independent media outlet in Hungary, Věra Jourová confirms her engagement for the respect of the rule of law 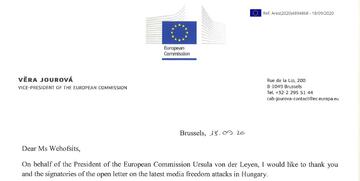 Here the text of the answer dated 18 September 2020 and addressed to Nora Wehofsits, who had sent the letter of concern being then the advocacy officer of ECPMF.

The answer is signed by Věra Jourová:

On behalf of the President of the European Commission Ursula von der Leyen, I would like to thank you and the signatories of the open letter on the latest media freedom attacks in Hungary.

Your organisations voice profound concern with regard to media-related developments in Hungary, in particular the dismissal of index.hu’s editor-in-chief by the new management and the subsequent resignation, en masse, of more than 70 journalists working for the online news media portal.

As you are aware, I have already expressed my own concern about these developments and I can assure you of my own personal commitment as well as the Commission’s renewed attention to media pluralism and media freedom issues, not least in the Commission’s European Democracy Action Plan.

The Commission remains strongly committed to upholding EU law and respect for fundamental rights, and the values on which the EU is founded. The Commission is closely monitoring the situation in all Member States, including Hungary, through the new European Rule of Law Mechanism. The first Annual Rule of Law Report - covering judicial independence, the anti-corruption framework, media pluralism and other institutional issues related to checks and balances - will be published by the end of this month.

The Commission has also proposed a Regulation on the protection of the Union budget in the case of generalised deficiencies as regards the rule of law in a Member State. These new rules proposed by the Commission would provide the Union with tools to protect its budget if deficiencies in the rule of law in a particular Member State affect or risk affecting the financial interests of the Union.

As confirmed by the July European Council, the necessity of this mechanism remains fully relevant in the context of the revised multiannual financial framework package and the Next Generation EU.