The European Centre for Press and Media Freedom, as part of Media Freedom Rapid Response calls on the Turkish authorities to immediately and unconditionally drop the charges against freelance journalist Oktay Candemir and to return his confiscated property in full and without delay 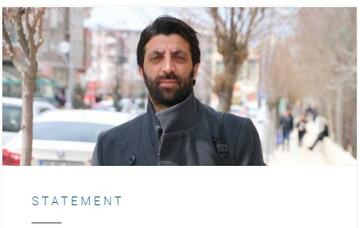 On 7 September 2020, police in the eastern city of Van arrested Candemir, who writes columns for the pro-Kurdish news site Nupel. The next day, he was released after being charged with “insulting the memory of a dead person”, which carries a maximum penalty of two years’ imprisonment. As part of the conditions of his release, Candemir is banned from travelling abroad and must check in with police regularly. His computer and personal archive were confiscated.

The charges against Candemir relate to a satirical tweet, posted on his personal twitter account on 3 September, in which he mocked a historical drama series produced by state broadcaster, TRT. According to the authorities, the tweet insulted Sultan Ertuğrul Ghazi, who lived in the 13th century and was the father of Osman I, founder of the Ottoman dynasty.

Since the attempted coup in July 2016, media freedom has been in steep decline in Turkey. In the crackdown on the press, pro-Kurdish journalists and outlets have been targeted with particular vigour.

This statement is by the Media Freedom Rapid Response (MFRR), which tracks, monitors and responds to violations of press and media freedom in EU Member States and Candidate Countries. This project provides legal and practical support, public advocacy and information to protect journalists and media workers. The MFRR is organised by an consortium led by the European Centre for Press and Media Freedom (ECPMF) including ARTICLE 19, the European Federation of Journalists (EFJ), Free Press Unlimited (FPU), the Institute for Applied Informatics at the University of Leipzig (InfAI), International Press Institute (IPI) and CCI/Osservatorio Balcani e Caucaso Transeuropa (OBCT). The project is co-funded by the European Commission.