EU Initiative: Include Hate Speech and Hate Crimes in the list of EU crimes

The EU Commission is asking stakeholders to provide their feedbak on the scale, nature and impact of the types of hate speech and hate crime under consideration. Deadline 20 April 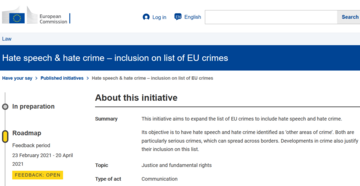 The Commission will carry out extensive targeted consultations of stakeholders to gather comprehensive information and factual evidence about the scale, nature and impact of hate speech and hate crime on the grounds under consideration, including the effects of such crimes on the individual victims, perpetrators as well as on society at large (for instance in terms of polarisation or of impacts on freedom of expression), as well as on developments, including any trends identified.

Such evidence is necessary to enable an assessment of whether these types of crime meet the criteria referred to in Article 83(1) TFEU Treaty on the Functioning of the European Union), i.e. whether they are particularly serious crimes that have a cross-border dimension, and whether there are “developments in crime” justifying their inclusion in the list of EU crimes in Article 83(1) TFEU.

The need for a common criminal law response at EU level has already been acknowledged in the case of racist and xenophobic hate speech and hate crime. Against this background, the list of EU crimes could be extended to cover hate speech and hate crime on the grounds covered by Framework Decision 2008/913/JHA, i.e. “race, colour, religion, descent or national or ethnic origin”. Drawing on Article 19 TFEU as source of inspiration, further grounds under consideration are sex and sexual orientation, as well as disability and age.

As mentioned above, the inclusion of hate speech and hate crime in the list of EU crimes will enable the Commission, in a second step, to establish minimum rules on the definition of criminal offences and sanctions in the areas of hate speech and hate crime, thus providing for a robust common criminal law response to these phenomena. This can only be achieved by providing for common standards of harmonisation applicable across the EU – it cannot be sufficiently achieved by Member States acting alone or in an uncoordinated manner.

In her State of the Union speech , Commission President von der Leyen stressed that progress on fighting racism and hate is fragile and now is the moment to make change to build a truly anti-racist Union that goes from condemnation to action. She announced that the Commission will propose “to extend the list of EU crimes to all forms of hate crime and hate speech – whether because of race, religion, gender or sexuality.”