Over 150 journalists, representatives of journalists’ organisations and press councils, as well as academics, politicians, and civil society activists gathered on 17-18 March at the Solidarność Centre in Gdansk, Poland, for the second edition of the Free European Media conference 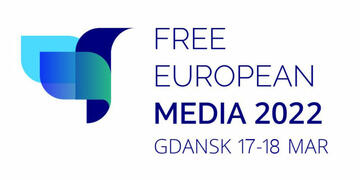 This text was published by the European Federation of Journalists (EFJ) :

Thursday evening’s event on the war in Ukraine brought together Ukrainian, Russian, Belarusian and Moldovan journalists, including Andrei Bastunets, President of the Belarusian Association of Journalists (BAJ) and Mykola Semena, delegate of the National Union of Journalists of Ukraine (NUJU).

Here is the overall resolution adopted at the end of the conference:

The appalling war against Ukraine is not only destroying the life of millions of people, but has also weaponized news and information with propaganda, disinformation, lies and censorship.

The truth is the first victim in a war and is currently threatened by disinformation and censorship. Ukraine is the victim of the armed invasion, but we are all victims of the information war. Democracies relies on free information, free journalism, and free media.

We strongly urge all European governments to respect, protect and support independent journalism across borders, including in the countries of war and conflict, and call for actions:

The conference has been organised by Free Europan Media and the European Federation of Journalists (EFJ) in cooperation with the European Commission (EC), the Council of Europe (CoE), the European Centre for Press and Media Freedom (ECPMF), the Nordic Council of Ministers (NMR), the Nordic Journalist Centre (NJC), Pomorskie Voivodeship, ESC – European Solidarity Centre, and the City of Gdansk.