Greece: journalists are denied access to the Moria camp 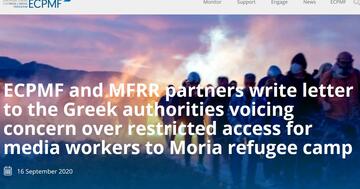 Here the letter that was sent to Greek authorities.

We are writing to express our concern about reports that since 9 September 2020, a number of journalists and photographers on the island of Lesbos have been  intermittently restricted from reporting from an area where thousands of refugees and asylum seekers are being held without accommodation or sanitation after fires destroyed large areas of the Moria Registration and Identification Centre.

We note that while some media workers who were trying to document the scene were able to gain access, others say that police officers blocked their entry without proper explanation or justification. Several reporters and a photojournalist report that they were told this was because of an ongoing “military operation”. When asked about the operation, police officers at the scene reportedly said that the order came from the police chief. Others report that they are unable to enter due to concerns about the spread of Covid-19. Although journalists were eventually allowed to enter the area from 4pm on Sunday 13 September, intermittent restrictions restarted on Monday and continue at the time of writing. The arbitrariness of these practices establishes an unequal and uncertain working environment for journalists and media workers.

Blocking journalists’ access to the site constitutes significant interference with their work that prevents them from playing their vital role as “public watchdogs”. It also adversely affects their ability to provide accurate and reliable information. In this regard, the European Court of Human Rights has found that the matter of how refugees and asylum seekers are accommodated, whether the State fulfils its international obligations towards them and whether this vulnerable group has the ability to fully enjoy their human rights are “undisputedly newsworthy and of great public significance” (Szurovecz v Hungary, App. No. 15428/16, 8 October 2019, para. 61).

We consider that, given the refugees’ circumstances currently on the island of Lesbos alongside the ongoing refugee crisis and the European community’s response to it, there is a heightened public interest in receiving information on the matter and very little scope for restricting journalists’ access.

Accordingly, we urge you to ensure that journalists and other media workers are able to safely access the relevant sites on Lesbos, in line with Greece’s obligations under international law.

This statement has been coordinated by the European Centre for Press and Media Freedom as part of the Media Freedom Rapid Response (MFRR), which tracks, monitors and responds to violations of press and media freedom in EU Member States and Candidate Countries. This project provides legal and practical support, public advocacy and information to protect journalists and media workers. The MFRR is organised by an consortium led by the European Centre for Press and Media Freedom (ECPMF) including ARTICLE 19, the European Federation of Journalists (EFJ), Free Press Unlimited (FPU), the Institute for Applied Informatics at the University of Leipzig (InfAI), International Press Institute (IPI) and CCI/Osservatorio Balcani e Caucaso Transeuropa (OBCT). The project is co-funded by the European Commission.