Impunity for crimes against journalists remains high, by IPI

The International Press Institute is celebrating the International Day to End Impunity for Crimes agaisnt Journalists: the analysis confirms that governments are failing to bring perpetrators to justice 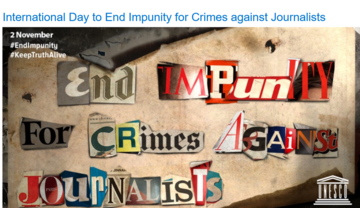 In an article published on its website, IPI gives an overview of unpunished crimes against journalists.

"Since last October, as many as 52 journalists have lost their lives due to their work, according to the Vienna-based IPI’s Death Watch. At least 24 were killed in targeted attacks. An additional 15 cases are considered to be likely targeted attacks but remain under investigation regarding the motive. Seven other journalists were killed in Syria and one in Iraq covering armed conflict, and two died in Iraq and one in Afghanistan reporting on civil unrest. An additional two journalists were killed while on assignment. In almost half of the cases, those responsible are still at large.

An IPI analysis of these cases shows an alarmingly insufficient response by authorities to grave crimes against journalists. So far, arrests have only been made in 10 cases, five each in the Americas and Asia.

The unbroken cycle of impunity for crimes against journalists fuels further violence against the press at a time when the free flow of news is more valuable than ever, IPI Deputy Director Scott Griffen said. The failure to bring those who kill journalists to justice is unacceptable and an attack on the public’s right to receive information.

The full article is here.