Representatives of 11 organisations, led by the International Press Institute, will meet key stakeholders in Istanbul and Ankara from 6 to 9 October 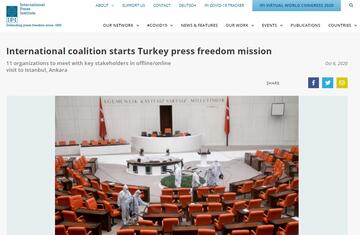 A coalition of 11 international press freedom, freedom of expression and journalists' organisations are leading a joint press freedom mission to Turkey this week from 6 to 9 October amid the country's continued press freedom crisis, which has further worsened under the coronavirus pandemic.

Representatives of the 11 organisations, led by the Vienna-based International Press Institute (IPI), will meet key stakeholders in Istanbul and Ankara, including representatives of the Turkish government and regulatory bodies, MPs from various political parties, the Turkish Constitutional Court, foreign diplomats, journalists, and members of civil society groups. The meetings will be held in a hybrid in-person/online format.

Press freedom in Turkey is increasingly restricted. Scores of journalists remain behind bars, and journalists' trials fail to comply with basic standards of the rule of law. Journalists who report critically on the Turkish government continue to be arrested and prosecuted on politically motivated charges.

This summer, Turkish lawmakers passed a controversial new social media law that is poised to expand digital censorship in the country. The past year has also seen an increase in the abuse of regulatory powers to punish independent media, especially in the broadcast sector. Amid the coronavirus pandemic, authorities have cracked down on media reporting that questions the government narrative, while a law passed in the spring declined to include jailed journalists in a prisoner release to ease overcrowding and protect prisoners’ health.