Italy: Nello Scavo and too many unanswered questions. An article for Mapping Media Freedom

The platform Mapping Media Freedom hosts an article by the Italian journalist Nello Scavo, under police protection for threats received after the publication of his investigations about the traffic of human beings in Libya 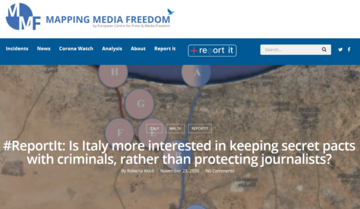 Nello Scavo recalls the most important events of the last three years, since the publication of his investigations on the Italian newspaper "Avvenire": he talks about legal and illegal businesses, about illegal prisons and unclear meetings between the Italian government and smugglers, and takes the opportunity to repeat unanswered questions.

Here some of the questions addressed to the Italian governement:

"... there are questions that the Italian government has never answered. Who were the members of the Libyan delegation that arrived in Italy in 2017? Neither Tripoli nor Rome has come forward with information regarding the composition of the delegation who travelled to Italy for a series of meetings in Italy aimed at stopping the migration flow, without obtaining in return a commitment to end the abuses in Libyan prison camps (...).

An official photo shows them in Rome at the command of the Italian Coast Guard. So why not disclose their names and assignments? Another question that needs to be answered is: who decided on the make-up of the delegation? Sources from the Italian government at that time (it was 2017), as well as their successors in government claimed that the Libyan delegation was invited by the International Organisation for Migration. However, the UN agency disputes this, stating that they had no role in the composition of the Libyan delegation, which was selected by unknown authorities in Tripoli and accepted by Italy".

The article is rich in background information and highlights a not-to-be forgotten episode in the recent history of Italian foreign affairs.

The full article is published by Mapping Media Freedom.