Jail and defamation: an international call to the Italian Constitutional Court

Waiting for the hearing of the Consitutional Court scheduled for June 9th, the partners of the Media Freedom Rapid Response call to the Court to cancel prison as a punishment for defamation. Qui la versione italiana 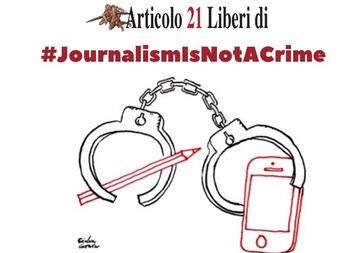 On Tuesday, 9 June 2020, the Italian Constitutional Court will hold a public hearing into the legitimacy of laws that allow for jail sentences for journalists convicted of defamation.

It comes after the Italian State Attorney submitted a memorandum to the Court on 31 March 2020 on behalf of the government, signalling its plans to retain tough legal provisions for journalists found guilty of publishing defamatory material in the press.

The Court will rule on the claim of unconstitutionality of Article 595 of the penal code and Article 13 of the law on the press. It can either reject the appeal, abolish prison sentences, or refer the issue to Parliament for further scrutiny.

We, the undersigned, urge the Court to abolish prison sentences as one crucial step towards reforming Italy’s defamation laws, as well as  an overhaul of the country’s civil defamation laws to protect journalists from abusive litigation and SLAPPs (strategic lawsuits against public participation).

The hearing represents a pivotal moment in a discussion that has lasted for decades, during which time dozens of journalists have been sentenced to prison for doing their jobs. Criminal defamation laws – and especially those that allow journalists to be jailed – violate international human rights standards and cast a shadow over the exercise of journalism, ultimately leading to self-censorship.

Currently, journalists in Italy face imprisonment for up to three years for defamation under article 595 of the Italian Criminal Code, with increased penalties if the defamatory statement is directed at a political, administrative, or judicial body or a representative of such a body. Defamation is also considered a criminal offence under the country’s press law, which allows for a jail term of up to six years.

In 2007, the Parliamentary Assembly of the Council of Europe called on “states whose laws still provide for prison sentences – although prison sentences are not actually imposed – to abolish them without delay”.

Despite these principles, criminal sanctions, including imprisonment, continue to be applied regularly against journalists in Italy. Numerous cases have been documented and condemned in recent years by international press freedom groups, although it is difficult to measure the full extent of the problem due a lack of reliable statistics. Comparative studies based on available data also suggest that Italy applies criminal defamation laws and corresponding prison sentences at a higher rate than in many other countries in Europe; in many EU countries where criminal defamation laws still exist, prosecutions against journalists and especially the imposition of prison sentences are rare.

The European Court of Human Rights has now repeatedly found Italy to have violated the free expression rights of journalists sentenced to prison (Ricca, Belpietro, Sallusti). The Court has ruled that “such a sanction, by its very nature, will inevitably have a chilling effect”, regardless of whether the sentence is actually carried out. It has also called legislative proposals in Italy to limit criminal sanctions for defamation and remove the penalty of imprisonment a “notable positive step”.

The repeal of criminal defamation laws does not prevent citizens from defending their reputations in court. Proportionate and carefully crafted civil defamation laws allow people to bring legitimate defamation claims, while also protecting the press’s right to report freely on matters of public interest – all without the Sword of Damocles of a possible jail sentence hanging over their head.

Unfortunately, Italy’s civil defamation laws are equally in need of serious reform. There are very few safeguards to protect against abuse or stop malicious plaintiffs from bringing unfounded cases and SLAPPs, meaning that journalists in Italy routinely face the spectre of financially crippling lawsuits. As a result, the likelihood of self-censorship remains high.

To fully protect press freedom, Italy needs comprehensive defamation law reform that includes the full repeal of all criminal provisions related to defamation at the same time as a complete overhaul of civil defamation law to shield journalists from abusive litigation such as SLAPPs.

The 9 June hearing could represent a crucial first step forward. The Constitutional Court has the opportunity to finally toss out Italy’s jail penalties and strengthen the type of watchdog journalism democracy needs. It should not miss it.

Institute for Applied Informatics at the University of Leipzig (InfAI)

This statement is part of the Media Freedom Rapid Response (MFRR), an Europe-wide mechanism, which tracks, monitors and responds to violations of press and media freedom in EU Member States and Candidate Countries. This project provides legal and practical support, public advocacy and information to protect journalists and media workers. The MFRR is organised by an consortium led by the European Centre for Press and Media Freedom (ECPMF) including ARTICLE 19, the European Federation of Journalists (EFJ), Free Press Unlimited (FPU), the Institute for Applied Informatics at the University of Leipzig (InfAI), International Press Institute (IPI) and CCI/Osservatorio Balcani e Caucaso Transeuropa (OBCT). The project is co-funded by the European Commission.