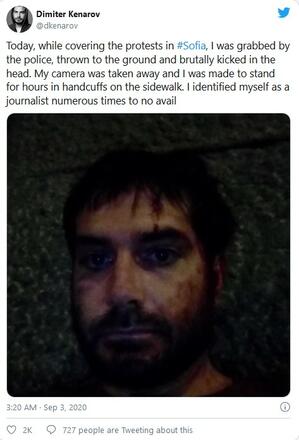 On the night of September 2, freelance journalist Dimitar Kenarov was handcuffed and detained by riot police officers as he was taking photos from the front of protests that had broken out in front of the National Assembly.

According to the journalist, he was dragged away from other media workers documenting the scene, thrown to the ground, and kicked in the head by two uniformed men. He later shared an account of his alleged beating and photos of his bruised and bloodied face on social media

Kenarov reported he had been clearly identifiable as a member of the media at the time by his camera and a PRESS sign which was clearly visible on his mask. Despite informing police on several occasions that he was a journalist and even showing them his ID, he said he was ignored and held handcuffed on the pavement and then in a police van for hours.

Later that night Kenarov was transported to the Fifth Police Department in Sofia, where he was handed a warning report and released without charge. He said throughout the detention he was denied access to a lawyer and not informed what the charges against him were.

The same day, police also hit Nikolay Doychinov, Sofia-based photojournalist for Agence France-Presse, on the back with batons and damaged his camera, according to reports.

Five media professionals working for private nation-wide television channel bTV were among those indiscriminately tear gassed as they were reporting from the protests in Sofia that same day, Venelin Petkov, director of news at bTV, told IPI.

“The rank-and-file police officers must be made aware of the key function journalists serve in society”, Petkov said.

Another reporter at the public broadcaster Bulgarian National Television, Nikolay Minkov, was reportedly evacuated by an ambulance to the nearby hospital after being pepper sprayed by police.

“In the last few days we’ve seen a clear escalation of attacks on journalists covering protests in Sofia by members of law enforcement”, IPI Deputy Director Scott Griffen said. “Authorities in Bulgaria have to answer for police brutality against the press. We call on the National Police Service and the Ministry of Interior to immediately open an investigation into all reports of beatings and identify those officers responsible so that they can be held to account.”

Journalists at media outlets critical of the government have also reported that police have refused to recognize valid press accreditation from reporters and denied others access behind police cordons.

Atanas Tchobanov, editor in Bivol.bg, an investigative journalism platform which has exposed high-level corruption in the government, told IPI its reporters were barred from entering press zones after they identified themselves as working for the outlet.

The demonstrations on September 2 were the latest part of multi-weeklong protests in Sofia against corruption and nepotism in the Bulgarian government. Protesters have been demanding the severing of ties between politicians and oligarchs and the resignation of the government led by Prime Minister Boyko Borissov and of the country’s recently instated Chief Prosecutor Ivan Geshev.

When the protests turned violent on their 56th day, police officers responded with pepper spray and other militarized tactics. Over 50 people were hurt and nearly 120 were arrested.