The consortium running the Media Freedom Rapid Response (MFRR) – consisting of the European Centre for Press and Media Freedom (ECPMF), ARTICLE 19 Europe, European Federation of Journalists (EFJ), Free Press Unlimited (FPU), International Press Institute (IPI), and Osservatorio Balcani Caucaso Transeuropa (OBC Transeuropa) – has been granted €1.95 million in funding from the European Commission to continue its work to defend and support press and media freedom throughout all EU member states, candidate countries, and Ukraine for the next 18 months 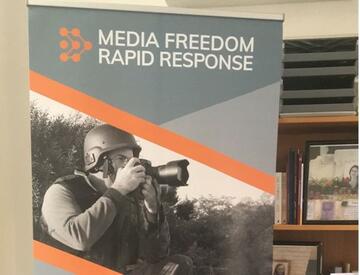 In 2020 and 2021, the consortium – which also included the Institute of Applied Informatics at the University of Leipzig (InfAI) for its first two years – established, designed, and delivered the MFRR in EU Member States and Candidate Countries. As of April 2022, the United Kingdom is no longer a part of the MFRR mandate due to Brexit. Beginning in May 2022, the MFRR region now also includes Ukraine.

Following the announcement, the Coordinator of the MFRR, Gürkan Özturan, said:

“The significance of defending free expression and the right to access information has once again been reiterated in the past year, with organisations across Europe working tirelessly to monitor, report, support, and advocate for issues related to press and media freedom. In the next 18 months of the Media Freedom Rapid Response we will continue monitoring press and media freedom violations, offering practical and legal support for journalists and media workers, and advocating for free and pluralistic media in EU member states, candidate countries, and Ukraine.”

“We at the ECPMF are looking forward to coordinating the Media Freedom Rapid Response in 2022 and 2023. For the first time journalists in Ukraine will be eligible to receive support through this programme. We highly appreciate this new rule set by the European Commission. It is a clear signal for the integration of Ukraine into the EU.

Since the Media Freedom Rapid response commenced in March 2020, it has developed into a highly effective instrument to protect journalists and foster media freedom. We recorded 1,341 alerts on our monitoring platform Mapping Media Freedom, we provided legal aid in 41 cases, and provided practical support for 81 media workers in need. We also produced over 200 advocacy outputs. This is only possible because of the intense collaboration among the consortium partners. The fight for media freedom motivates and unifies us. In the third term of the Media Freedom Rapid Response, we will further strengthen our efforts to reach out to the most vulnerable groups among journalists – women journalists, local journalists, and media workers belonging to minorities or reporting about the issues of those. And we will run coordinated, strong campaigns.