Malta: Nello Scavo insulted after testifying in the case against Neville Gafà

Upon leaving the hearing, Italian journalist Nello Scavo and Maltese blogger Manuel Delia were insulted by a crowd of people in support of Gafà. ECPMF condemns the insults, recalling that verbal threats from high-profile individuals can lead to acts of violence and send a message of impunity 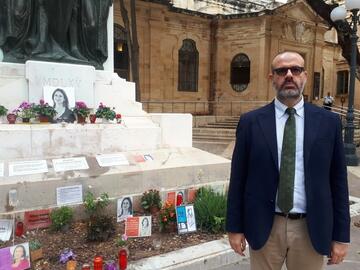 The European Centre for Press and Media Freedom condemns the insults faced by Italian journalist Nello Scavo as he left the court in Valletta, yesterday. Scavo was testifying in the criminal case against Neville Gafà, who had threatened him online. Upon leaving the hearing, Scavo and Maltese blogger Manuel Delia were insulted with vulgar epithets shouted in Italian by a crowd of people who had amassed in apparent support of Gafà.

On 27 June 2020 Gafà, a former person of trust in the Office of the Maltese Prime Minister, issued a threat against Scavo of the national newspaper Avvenire. In response to a tweet posted by AlarmPhone, an independent support organisation for people crossing the Mediterranean, Gafà called on the organisation to “stop your dirty business”. When Scavo responded questioning the former official’s record, Gafà called for him to “stop your dirty business. If not, we will be stopping you.”

At the hearing, Scavo testified that he felt threatened by Gafà’s tweets and wanted to know the identity of the people who would “stop him” from speaking about migration and refugees. Scavo has previously faced threats as a consequence of his reporting on human trafficking and fuel and arms smuggling. Since October 2019 he has lived under police protection.

We welcome the fact that the judge recognised the editorial staff of Avvenire and the National Federation of the Italian Press (FNSI) as civil parties in the criminal trial, as it gives appropriate recognition to the chilling effect on media freedom of threats against a reporter, beyond the immediate case at hand.

We further recall that the assassination of investigative journalist Daphne Caruana Galizia was preceded by years of verbal threats, attacks on her home, vexatious legal actions and other forms of harassment. Verbal threats from government officials and high-profile individuals, in particular, demonise the media and independent scrutiny and can, if unaddressed, lead to physical acts of violence and send a message of impunity.

A verdict will be pronounced on 15 October 2020. We call on the court to ensure that their decision reflects the gravity of the crime.

This statement has been prepared by European Centre for Press and Media Freedom (ECPMF) as part of the Media Freedom Rapid Response (MFRR), which tracks, monitors and responds to violations of press and media freedom in EU Member States and Candidate Countries. This project provides legal and practical support, public advocacy and information to protect journalists and media workers. The MFRR is organised by a consortium led by the European Centre for Press and Media Freedom (ECPMF) including ARTICLE 19, the European Federation of Journalists (EFJ), Free Press Unlimited (FPU), the Institute for Applied Informatics at the University of Leipzig (InfAI), International Press Institute (IPI) and CCI/Osservatorio Balcani e Caucaso Transeuropa (OBCT). The project is co-funded by the European Commission.