Montenegro: Jovo Martinovic sentenced by the High Court to one year in prison for drug trafficking

MFRR partners and media freedom organisations condemn the verdict and the entire proceedings. Beyond the violation of Martinovic’s human rights, his prosecution and conviction contribute to a chilling effect on media freedom in Montenegro 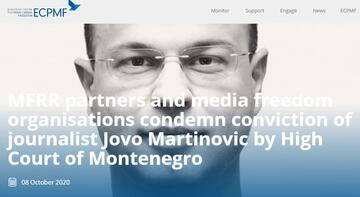 The ​Media Freedom Rapid Response​ partners and media freedom organisations strongly condemn today’s decision by the High Court of Montenegro to sentence investigative journalist Martinovic​ to one year in prison for participating in drug trafficking. While he was acquitted on charges for membership in a criminal organization and will not spend time in prison due to the time already spent in pre-trial detention, he will have a criminal record. This verdict is an attack on investigative journalism and a damning indictment on media freedom in Montenegro.

Martinovic’s conviction is a gross injustice, following almost five years of judicial persecution merely for doing his job. Beyond the violation of Martinovic’s human rights, his prosecution and conviction moreover contribute to a chilling effect on media freedom in Montenegro and raise serious concerns about the effectiveness of the rule of law in the country, a key condition for accession to the European Union. Questions remain as to the court’s readiness to take into consideration evidence from the defence or establish an understanding of the journalistic practices that readily explain Martinovic’s actions.

Ahead of the decision​, we had repeatedly called on the Court to take full account of the overwhelming evidence of Martinovic’s innocence and to acquit. It has been clear from the start that Martinovic, a specialist in covering organised crime for leading international media, was in contact with criminal networks solely due to his journalistic coverage. After his initial arrest, Martinovic spent almost 15 months in pre-trial detention before he was provisionally freed. Since then, he has had to dedicate resources to this lengthy politically motivated prosecution in which his fair trial rights were violated.

While Jovo Martinovic has stated he will appeal this verdict, the MFRR reiterates our condemnation, not just of the verdict, but of the entire proceedings. Martinovic should never have been charged or detained. His actions were in line with existing and established standards of journalism, especially when covering issues related to organised crime and corruption. The legacy of this process is the increased criminalisation of investigative journalism in Montenegro and could encourage other journalists and media workers to avoid sensitive but necessary reporting.

This statement is part of the Media Freedom Rapid Response (MFRR), an Europe-wide mechanism, which tracks, monitors and responds to violations of press and media freedom in EU Member States and Candidate Countries. This project provides legal and practical support, public advocacy and information to protect journalists and media workers. The MFRR is organised by an consortium led by the European Centre for Press and Media Freedom (ECPMF) with ARTICLE 19, the European Federation of Journalists (EFJ), Free Press Unlimited (FPU), the Institute for Applied Informatics at the University of Leipzig (InfAI), International Press Institute (IPI) and CCI/Osservatorio Balcani e Caucaso Transeuropa (OBCT). The project is co-funded by the European Commission. www.mfrr.eu