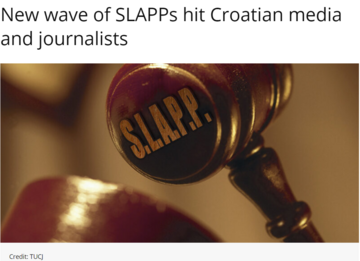 The European Federation of Journalists is hosting the call of the Croatian journalists’ trade union and professional associations (TUCJ and CJA), that announced that a new wave of vexatious lawsuits (SLAPP) is hitting Croatian media and journalists.

The dozen of SLAPPs targets Telegram news portal, Virovitica.net, Index and journalist Dora Kršul. The European Federation of Journalists (EFJ) joined its affiliates in Croatia in denouncing an attempt to intimidate and silence investigative journalism.

Nine lawsuits filed by former Agriculture Minister Tolušić are to be added to another lawsuit against Telegram news portal. The disputed articles referred respectively to Tolušić’s winery as well as to the proceeding initiated against him for misreporting the size of his property.

Virovitica.net portal is facing two active lawsuits (5.280 euros) filed by Tolušić for reporting about the same concealed property. The editor-in-chief Goran Gazdek is also facing a lawsuit filed by Member of Parliament Romana Nikolić who demands almost 3.000 euros for a report about former conviction.

“They are counting that we would have to hire lawyers and defend ourselves in courtrooms so we may not have time for new stories,” Gazdek said.

“Branimir Glavaš also joined the lawsuits against Index, and Rector Boras sued journalist Dora Kršul for a story made according to all the rules of the journalistic profession“, said CJA President Hrvoje Zovko at a press conference on 28 October.

“They solve criticism of their work by filing lawsuits, as a form of intimidation of journalists and imposition of censorship,” Zovko added.