Pioneering anti-SLAPP Training for Freedom of Expression seeks to train the lawyers defending journalists and media organisations, NGOs and activists against companies and governmental figures using lawfare to shut down legitimate criticism 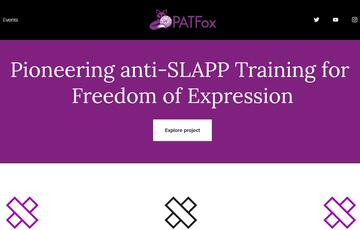 Courts are designed to right wrongs—to achieve justice. But courts can be abused. Vexatious litigation has been around for as long as courts have, but the 2000s have seen an epidemic of a new kind of legal harassment. Strategic litigation against public participation (SLAPP) suits are commonly directed at journalists (or their media organisations) or rights-defending activists (or their NGOs).

Plaintiffs have no reasonable path to victory, but victory isn’t the point. The point of a SLAPP is scaring the defendant into silence using the threat of costly litigation. SLAPPs intend to bankrupt opponents of exploitative companies or corrupt government agencies and pre-emptively chill the future exposure of wrongdoing.

PATFox will identify and train between ten and twenty lawyers in eleven EU member states in techniques and strategies for defending against SLAPP suits.

Defending against SLAPP suits is an as-yet entirely-undeveloped field. Most lawyers, if they’ve even heard of the term, have only a vague idea what it encompasses; it’s unlikely it was mentioned in their law school courses.