PPF Group and media ownership: an exchange between MFRR and the company

The prompt answer of international investment group PPF to the letter of concern signed by international press freedom organizations is quite generic and leaves many issues open, but it is a first step forward 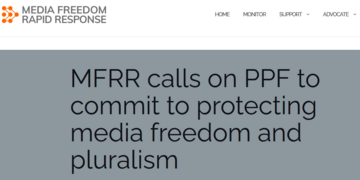 On 20 October, a letter of concern is sent to PPF Group, a company that invests in multiple market segments such as financial services, telecommunications, biotechnology, real estate and mechanical engineering from Europe to North America and across Asia. The same day, the answer appears on the group's website.

To the concerns of MFRR, the group answers that the acquisition of a majority stake in the Central European Media Entreprises (CME), which added more than 30 TV channels broadcasting in Eastern Europe, was made with "the goal of further developing our network of commercial television stations" and even if an "undeniable part of this includes news that is independently and professionally delivered", PPF "understands the key role that independent and objective media play in our society and we will continue to adhere to the values that have made CME’s news widely respected". The answer stresses that "PPF and CME fully respect independent, objective, pluralistic and high-quality journalism to continue, just as we stated when we announced the completion of the CME acquisition".

The issue is very delicate and cross-sector media ownership plays an important role in defining freedom of expression and limiting the activity of journalism.

Here the letter that expressed MFRR's and RSF's concerns:

In light of recent developments, the undersigned partners of the Media Freedom Rapid Response (MFRR) and other press freedom organisations, are writing to raise a number of topics regarding media ownership and editorial independence.

We are aware that on 6 October, the European Commission gave the green light under the EU Merger Regulation for your PPF Group to purchase a majority stake in the Central European Media Enterprises (CME) from AT&T’s WarnerMedia for approximately €940 million. After the deal was finalised on 13 October, your company added to its business portfolio more than 30 TV channels broadcasting to approximately 45 million people across Bulgaria, Czechia, Romania, Slovakia and Slovenia, including influential brands such as bTV and Nova.

This acquisition has wide-ranging implications for the media landscapes in each of these five states. It also comes at a time when media freedom and independent journalism are under significant pressure throughout Central and Eastern Europe, including all five countries mentioned above. Therefore, in taking over CME at this time, PPF Group will shoulder a significant responsibility in light of the media’s role, in any democratic society, of providing citizens with independent information on matters of public interest. It is essential that it lives up to it.

As a consortium of organisations with decades of shared experience working in Central and Eastern Europe, we are all too aware that the commitment of media owners to the value of quality, independent journalism is a key determinant for media freedom in the region. The importance of these issues has recently been outlined in the European Commission’s Rule of Law report, which singled out media ownership and transparency as major underlying issues in all five of the aforementioned countries.

Central here is the issue of editorial independence. In your last PPF Annual report, you clearly stated that you have no desire for the company to enter politics in any way. It is essential this standard is upheld, given that the media outlets you now own play a major role in public debate and opinion in their respective countries. Outlets with such a wide reach have a particular responsibility to provide citizens with independent, quality information while avoiding the promotion of specific commercial or political interests or the perception thereof.

It is also for this reason that their ability to work free from any interference is paramount. Newsrooms must be able to cover any topic without rebuke and the press must be free to carry out its watchdog role in holding those in power to account, whatever their level of political or business influence. Journalists must be able to follow the story wherever it leads.

In this context, we note PPF’s extensive commercial dealings with China, whose leadership is particularly averse to criticism, especially on issues such as the treatment of Uighur Muslims in Xinjiang, Taiwan or Hong Kong, where a mass crackdown on fundamental rights is underway. The growing role of China in Central Europe is an issue of undisputed public interest in the region. Therefore, we ask you to ensure that the outlets you own are editorially free to publish critically about Chinese policy or investment in their countries without pressure to soften stances or avoid certain issues, no matter the repercussions for other investments or relations. Likewise, they must not become PR firms for boosting China’s image or currying favour.

Cross-sector media ownership, as in the case of PPF’s media investment, carries inherent risks. Sadly, examples abound in recent years of cases where similar takeovers by business groups in Europe have led to the swift replacement of editors for what appeared to be reasons related to political or business interests. The apparent instrumentalization of media for private ends rather than the public good greatly damages the perception of editorial independence and contributes to diminished public trust in the media overall. It is vital that such practices are not repeated elsewhere.

Considering these concerns, our organisations call on you to take this opportunity to reaffirm your support publicly for the values, norms and laws that underpin media freedom. In addition, as the owner of PPF Group, we ask you to commit in writing to ensuring that the editorial independence of all stations newly acquired by your group will be respected, regardless of political or financial pressure.

We note that when previously asked to make such commitments by the Czech Syndicate of Journalists, PPF’s Chief of Public and Government Affairs, Vladimír Mlynář, a former independent journalist himself, declined to address such concerns.

Doing so now, in the wake of the purchase of CME being finalised, would be an important symbol of PPF’s re-commitment to protecting media freedom and ease the uncertainty that many journalists across these 30 TV stations are feeling at this moment.

Our organisations will continue to closely monitor this situation and would be glad to offer our combined expertise on matters of press and media freedom.

We ask you to take our concerns into consideration and look forward to seeing your response.