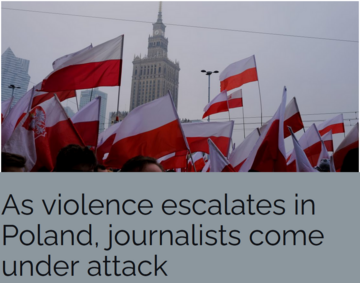 IPI, a global network of editors, media executives and leading journalists for press freedom, also called for all physical attacks on journalists to be thoroughly investigated by police and prosecutors to ensure those responsible are brought to justice.

Over the last three nights, incidents of aggression towards journalists have been reported by various media outlets as Poland reels from large scale protests sparked by a controversial ruling by the Polish Constitutional Tribunal restricting abortions.

Attacks on media were documented in Poznań, Wrocław and Warsaw, where a nine-day long nationwide Women’s Strike has grown into wider anti-government demonstrations and been met with increasingly violent counter protests.

At least three journalists have suffered injuries, including one from leading daily Gazeta Wyborcza who was taken to hospital after being assaulted by masked men.

IPI Deputy Director Scott Griffen said journalists from media outlets reporting on the women’s marches and media critical of the government had been attacked by nationalist and football hooligan groups.

He added that regional crews of the state broadcaster TVP – which has become a mouthpiece of the ruling Law and Justice party after having its editorial independence eroded – have also faced threats of intimidation from protesters frustrated at its coverage.

“All attacks on the media in Poland, regardless of what outlet or publication they work for, are an attack on press freedom”, he said. “No journalist should ever become the target of intimidation, threats or physical aggression because of their work.

“We strongly condemn all acts of aggression and call for demonstrators and police to ensure that the safety of journalists documenting covering protests is ensured. All attacks documented over the last few days must be fully investigated by authorities and those responsible must be held accountable.”

Media in the firing line

At around 8.30pm on Wednesday October 28, Gazeta Wyborcza journalist Magda Kozioł was hit in the stomach and thrown to the ground by a masked man after she filmed a group of 30 black-clad men intimidating protesters during a women’s march in Wrocław.

She was treated in hospital for minor injuries, Piotr Stasiński, Gazeta Wyborcza deputy editor, told IPI. On Thursday, Gazeta Wyborcza reported that the man was detained by the police and belonged to a football hooligan group.

During the same incident, Gazeta Wyborcza reporter Joanna Urbańska-Jaworska was dragged and thrown to the ground by one of the masked men, knocking the camera out of her hands. The situation was filmed by a reporter from Radio GRA and both incidents were reported to the police.

“We stand in protest against the barbaric attack and guarantee that we will do everything to ensure that the perpetrators responsible for the assault face justice”, the editorial board of the newspaper said in a statement.

The same day, another journalist for Gazeta Wyborcza reporting from Poznan, Piotr Żytnicki, was hospitalized and underwent an X-ray after fire crackers were thrown by football hooligans at a police horse, which then bolted and ran over his foot. He was taken to hospital in an ambulance and suffered serious bruising but no broken bones.

At around 10pm on the evening of October 26, TVP published a video of what it said was a car of a crew from TVP 3 Poznań being kicked by a group of protesters. It claimed the vehicle suffered damage to the doors, roof and wing mirror. Video shows the journalist and camera operator inside being insulted and sworn at.

TVP, which has been the target of protests over what women’s rights groups say is its stigmatizing and propagandistic coverage, has reported numerous other incidents of its journalists facing threats and insults during their reporting from the streets in recent days. On Thursday October 29, a protest was held outside the TVP headquarters in Warsaw.

According to other reports, at least four independent photojournalists were caught up in a charge by police officers in riot gear in Poznań on October 27.

Meanwhile, the head of the Polish Police Trade Union (NSZZ) warned it would take legal action against outlets spreading “pseudo-information” about police brutality, shortly after highlighting reporting from Gazeta Wyborcza and and radio station TOK FM.

“I warn the authors of such pseudo-information that we are considering taking legal steps against journalists who use this type of manipulation,” the statement said.

The Council of Press Club Polska condemned the physical aggression towards journalists and media workers, adding: “Preventing journalists from working is not only a breach of the law, but above all the right to information of their viewers, listeners and readers.”

Jolanta Hajdasz, director of the Press Freedom Monitoring Center of the Polish Society of Journalists, denounced the obstruction of journalists’ work in the performance of their professional duties, stressing that “physical attacks on journalists, cinematographers or photojournalists are a clear violation of the principle of freedom of speech”.

Three of the five members of the Polish National Broadcasting Council (KRRiT) also issued a statement condemning attacks on journalists on public television and journalists from Catholic media.

Griffen added: “During this time, we also urge all media outlets in Poland both private and public to uphold the highest standards of professionalism, ethics and balance in their reporting.”