An analysis by IPI: A long-feared, Hungary-style takeover of independent media in Poland gathered pace this week as a state-controlled energy giant announced the acquisition of a media company with more than 20 regional dailies, 120 weekly magazines and 500 online portals across the country, the International Press Institute (IPI) warned 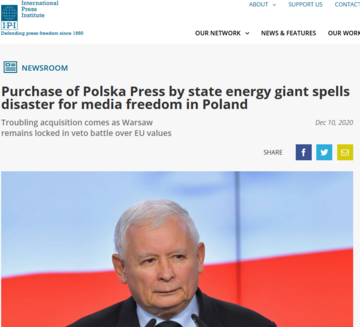 IPI said the purchase of Polska Press represented a worrying victory for the Law and Justice (PiS) party in its efforts to “repolonize” the country’s foreign-owned press and concentrate media in the hands of the government.

It also called on Brussels to recognize the continued and brazen attempts to run roughshod over EU values in bringing the media under greater government control.

On December 7, the state-controlled oil refiner and petrol retailer PKN Orlen announced that it would purchase 100% of the shares of Polska Press from German company Verlagsgruppe Passau for a reported PLN 120 million (€27 million).

As one of the country’s largest media companies and owner of 20 out of Poland’s 24 regional newspapers, Polska Press has long been a target of PiS’s plans to “repolonize” and “deconcentrate” the media landscape.

In recent years, the government has repeatedly sought to pass legislative changes which would have forced foreign owners to sell up and leave. However, these proposed laws were met with strong political and diplomatic pressure from the U.S and the EU, forcing the Ministry of Culture to shelve the plans and the government to look for alternatives.

IPI Deputy Director Scott Griffen said by now accomplishing the purchase of Polska Press without legislative changes, the government had engineered the takeover of a foreign media company without provoking another head-on collision with the EU at a time when relations were already strained, thereby quietly opening the door to the appointment of pro-government journalists and censorship of critical voices.

The full statement is published here .