MFRR partners call for progress and transparency in investigation 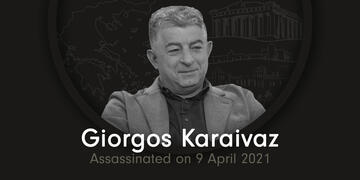 April 9 marks the one-year anniversary of the killing of veteran Greek crime reporter Giorgos Karaivaz in Athens. Ahead of the date, the partners of the Media Freedom Rapid Response (MFRR) today honour Karaivaz’s memory and call on the Greek authorities to urgently bring to justice all those responsible for this abhorrent murder and to provide more transparency about the investigation.

On April 9, 2021, Karaivaz, an experienced reporter who worked for the TV channel STAR and ran a news website focusing on crime and policing, was gunned down by two men on a scooter outside his home in broad daylight. After the killing, police said the “professional” style of the hit indicated the involvement of organised crime groups, which have carried out a number of targeted killings in recent years and which Karaivaz was known to have investigated.

Karaivaz’s assassination represents a low point for press freedom in Greece and has drawn international attention to the country’s significant problems with journalists’ safety, many of which were highlighted in our recent MFRR mission report.

No signs of progress

Troublingly, over the last year the Greek authorities have not announced any significant progress in the investigation. Despite the collection of substantial amounts of data, security camera footage, and forensic analysis, no suspects have been publicly identified and no arrests have been made. Despite multiple requests from the MFRR partners and other press and media freedom organisations, information about the status of the investigation has been kept secret, relying on an unwarrantedly restrictive interpretation of the Greek Code of Criminal Procedure. Contrary to the authorities’ promises, progress in the investigation appears to be slow.

Although we acknowledge that a murder investigaton requires a certain level of discretion, we emphasise that transparency and public scrutiny are essential to monitoring progress and preventing impunity. Given the fact that the killing took place a year ago without any visible progress, we urge authorities to provide an update on the status of this case, which is a matter of high public interest.

The European Commission Recommendation on ensuring the protection, safety and empowerment of journalists in the European Union states that “Member States should investigate and prosecute all criminal acts committed against journalists, whether online or offline, in an impartial, independent, effective, transparent, and timely manner, making full use of existing national and European legislation - to ensure that fundamental rights are protected and justice is swiftly delivered [...] and prevent the emergence of a ‘culture’ of impunity regarding attacks against journalists.” The Council of Europe’s 2016 Recommendation on the protection of journalists in this regard says that “Investigations into killings, attacks and ill-treatment must be effective and therefore respect the essential requirements of adequacy, thoroughness, impartiality, and independence, promptness and public scrutiny”.

The uncertainty and the lack of communication by police and prosecution service have a chilling effect on the work of other journalists, which was confirmed by MFRR’s recently published report on the safety of journalists in Greece.

The longer that these kinds of attacks go unpunished, the higher the risk of long-term impunity. Moreover, others thinking about silencing journalists are more likely to act, as they see that attacks on the press carry no consequences.

On the one-year anniversary of the brutal murder of Giorgos Karaivaz, we renew our call for all those responsible to be identified and prosecuted. We will continue to honour Karaivaz’s memory and push for justice for both him and his family.