Renate Schroeder, EFJ: Why we need a strong Media Freedom Act in Europe

An analysis by the Director of the European Federation of Journalists 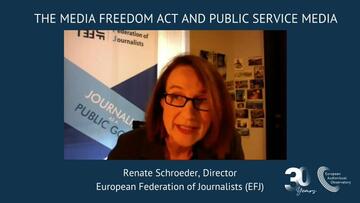 Have you heard about the dire state of media freedom in Europe or in your country? Does this mean anything to you?

Once a year, on World Press Freedom Day (3rd of May) we celebrate journalists’ vital contribution to democracy. We also draw attention to the increasing pressures, threats and attacks they face and call for their protection and support for the freedom, independence and pluralism of the media.

The death of 10 journalists and media workers in Ukraine since the start of the Russian invasion underscore the level of danger to which those covering conflict are exposed. But the killing of journalists is not limited to conflict situations.

In 2021, the European Federation of Journalists reported 6 assassinations of journalists in Europe, 4 of them targeted for their work, 2 of them in the EU, The Netherlands and Greece. In an unprecedented way, journalists are being  attacked when covering demonstrations or investigating allegations of corruption, organized crime and environmental malpractice.

They are routinely targeted with online threats and hate speech. Female journalists in particular face vicious, sexualized and malicious online attacks. The recently published report on safety of journalists by the Council of Europe, called ``Defending Press Freedom in Times of Tension and Conflict” states that a total of 110 alerts of harassment and intimidation of journalists were published on the Safety of Journalists Platform in 2021, compared to 70 in 2020.

Independent journalism is imperiled by ever more crackdowns on press freedom, targeted surveillance and judicial harassment of journalists, high levels of impunity for crimes against journalists, editorial capture by political or business interests, and mounting financial difficulties for many news outlets. Let alone the precarious economic status of freelance journalists.

Cases of spying on journalists and media workers using sophisticated spyware programs have multiplied in recent years.  In July 2021, the Forbidden Stories project revealed that 180 journalists’ smartphones were infected with Pegasus spyware all over the world, including in Hungary, Belgium,  and France.

Public Service Media (PSM) is increasingly attacked when it comes to its editorial and financial independence. Their values (universality and diversity), their editorial guidelines (which include impartiality and accuracy) and their standards related to their remit, funding and governance, including in the online and platform environment, should make them indispensable institutions in truly democratic societies. Well-funded, independent PSM are generally associated with healthy democracies.

But PSM in almost all parts of Europe faced in 2021  new waves of pressures that threatened or undermined editorial independence. Public criticism and displays of antagonism to public media during the Covid-19 pandemic amplified that trend, as PSM were frequently accused of political bias or blamed for delivering unwelcome news and information.

Media concentration, especially at the regional and local level is a threat to pluralism throughout Europe. News deserts at the local level mean that the people’s right to know is endangered. The level of state capture and complete diminishing of independent media is most visible in Hungary, but spreading throughout Europe and has rung the alarm bell among many stakeholders including the European Commission and the European Parliament.

All these attacks have to be framed within an environment of market failure in journalism, of disinformation going viral and online platforms relying their business models on attention economy and clickbaits.

UNESCO’s motto “information is a public good” and the European Federation of Journalists’ motto “journalism is a public good” call for urgent action. Public goods need to be protected, both legally, financially and socially. That means that governments are to supply public goods that markets either fail to provide or cannot provide efficiently.  In the case of journalism of course at arms’ length!

While the EU and its members have taken some important steps to tackle the problems, such as a recommendation on the safety of journalists, a directive on whistleblowers protection, a draft directive on SLAPP (strategic lawsuits against public participation) and more funding measures to support independent journalism, more needs to be done to build political will and translate commitments into concrete action at the national level.

States should foster media freedom, pluralism, independence and viability. They should prevent undue concentration and ensure transparency of media ownership and of the allocation of government advertising revenue. The European Union adopted the Charter of Fundamental Rights with its Article 11 on guaranteeing media freedom and pluralism with the Lisbon Treaty on 1 December 2009. It is legally binding in every EU member state. However, there is no sanction if not applied.

Therefore, in December 2021 the European Commission launched an open public consultation on the upcoming European Media Freedom Act, a landmark initiative announced by President von der Leyen in her 2021 State of the Union address to safeguard the pluralism and independence of the media in the EU internal market. A call for evidence was published outlining the main aims of the initiative, possible options and impacts. The Commission is now working on the Act and is supposed to come up with a proposed legal tool by July this year. It is not yet sure, which legal form and legal basis the European Media Freedom Act will have.

What is sure is that we urgently need legal tools to enforce a legal framework in which independent media and journalism can survive!

Vice President of the European Commission for Values and Transparency  Věra Jourová,  said recently that “the European Media Freedom Act will enshrine, for the first time in EU law, common standards to protect media pluralism and the editorial independence of the media.”

Unless we repair the market failure in journalism and the ever more precarious status of journalists not only leading in many countries to more self-censorship but also to a worrying brain drain, to an unprecedented vulnerability  and decrease in the quality of editorial work,  and   unless we can convince governments to have the political will to regard protection of journalists as a cornerstone of the rule of law and democracy, we may fail to sustain journalism as a public good! A strong European Media Freedom Act is an important step. The upcoming Czech Presidency promised to do its part.