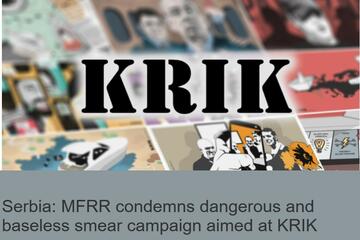 The MFRR urges the BIA director Bratislav Gasic to immediately withdraw the civil lawsuit against KRIK and to refrain from weaponising the law to intimidate media outlets investigating the nexus between crime, corruption and politics in Serbia.

The SLAPP lawsuit stems from an article KRIK published on April 9 which reported details of wiretapped conversations played as evidence in the murder trial of criminal gang chief Zoran Jotic, during which Gasic’s name was mentioned.

The article by journalist Milica Vojinovic reported that during one of the recordings one accused gang members said that Jotic did not have to worry about his safety because Gasic was "on the cauldron", i.e. on the payroll of the clan leader. KRIK asked Gasic to comment before publishing the story but the request went unanswered.

In response to the article - “Political connections of the Krusevac criminal group: 'Jotka had Gasic on the cauldron' – the BIA director denied the allegations and accused KRIK’s journalist of presenting "a malicious interpretation of the wiretapped conversation” which damaged his “reputation and honour”. The 500,000 dinars (€4,250) lawsuit called on the court to "let the media know that borders exist and must be respected."

KRIK editor-in-chief, Stevan Dojčinović, has rightly defended the article and said KRIK is prepared to fight the case in court, stressing it simply conveyed information from evidence presented during the trial, which was held under normal reporting conditions. The article reported numerous other details from the intercepted phone conversations about alleged criminal associations with unnamed government ministers.

Journalists are free to publish anything which is said or given as evidence in a Serbian court. The information reported by KRIK was presented as evidence by the prosecution, it was reported accurately, and the BIA director was given the chance to respond, in line with standard journalistic practice.

Our organisations therefore consider this SLAPP lawsuit to be groundless and hope it will be swiftly dismissed by the courts. It is an unacceptable attempt to pressure KRIK not to report information which is clearly in the public interest. This SLAPP lawsuit also comes on the back of a concerted and baseless smear campaign against KRIKs journalists in recent months which has been fanned by certain politicians.

These kinds of vexatious demands for damages against investigative media outlets burden them with costly legal fees and lengthy court battles, distracting from their job of exposing wrongdoing and holding power to account. In Serbia, such lawsuits have all too often been instrumentalised by politicians or powerful individuals to try and stifle independent reporting, as our recent MFRR report outlined.

We call on Director Gasic to withdraw the lawsuit and for public officials and politicians in Serbia to stop using insult and defamation laws as a tool to intimidate critical journalism. Courts must fully comply with international freedom of expression standards when ruling on cases brought by public officials against media which involve claims involving harm in the form of mental anguish.

As our MFRR report notes, press and media freedom in Serbia are in serious need of improvement. An end to baseless lawsuits against journalists and independent media outlets by the country’s public officials would be a good place to start.