Gordana Bjeletić and her colleagues were targeted with death threats, CFWIJ spoke to her after filing a complaint about the brutal attacks to the police 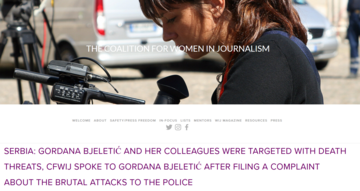 The Coalition For Women In Journalism (CFWIJ) is deeply concerned about the journalists' safety in Serbia. We, therefore, urge the authorities to take these attacks critical and should be investigated. We document many women journalists as a target of online smear campaigns. Some of them were even physically assaulted as a result of such threats.

The CFWIJ spoke to Gordana Bjeletić, editor-in-chief of Juzne Vesti, to understand her and the editorial desk’s situation after being a target with online death threats and how they took measures against any form of attack.

According to Gordana, the insults they received are not their first time however, she said she was terrified after reading those threats.

The full interview can be found here .