Slovakia: the last hearing of the trial for Ján Kuciak's murder

The Media Freedom Rapid Response (MFRR) today renewed its call for justice for Slovak journalist Ján Kuciak and his fiancée, Martina Kušnírová, as a court in Pezinok prepares to issue a verdict in the trial of their suspected killers. The court announced that the hearing of 5 August has been cancelled and rescheduled until Sep 3. IPI is going to attend expected verdict announcement 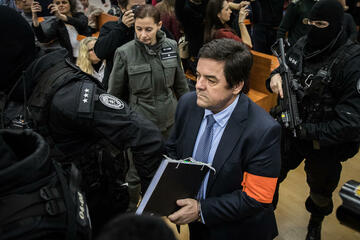 Kuciak, whose work for the online news site Aktuality.sk uncovered allegations of tax fraud and financial crime implicating prominent business and political leaders in Slovakia, and Kušnírová were killed in their home on 21 February 2018. The double murder sparked the largest protests in Slovakia since the Velvet Revolution, and led to the resignations of the Prime Minister Róbert Fico, Interior Minister Robert Kaliňák, Culture Minister Marek Maďarič, and Chief of Police Tibor Gašpar.

After 22 days of hearings, the Specialized Criminal Court is expected to issue a verdict in the murder trial on Wednesday, 5 August. The Vienna-based International Press Institute (IPI), which has been monitoring the trial in person, will attend the verdict hearing on behalf of the MFRR.

Prosecutors have alleged that controversial businessman Marian Kočner ordered Kuciak’s killing in response to Kuciak’s coverage of Kočner’s political and financial dealings, and asked a trusted associate, Alena Zsuzsová, to arrange it. Zsuzsová is said to have contracted a middleman, Zoltán Andruskó, who then in turn hired a pair of cousins, Tomáš Szabó and Miroslav Marček, to carry out the deed.

Marček, a former soldier, pled guilty in January 2020. He told the court that he shot Kuciak twice in the chest when the journalist opened the door to the couple’s newly bought home. He said that he then killed Kušnírová – apparently unplanned – after she saw his face, chasing her into the kitchen and shooting her in the head. Marček was sentenced to 23 years in prison in April.

In December, Andruskó also confessed and agreed to cooperate with prosecutors. He was sentenced to 15 years in prison and has emerged as a key prosecution witness, testifying that Zsuzsová showed him photographs of Kuciak and later paid him 50,000 euros in cash for the murder.

Meanwhile, data extracted from Kočner’s mobile phone, prosecutors contend, show Kočner and Zsuzsová discussing the murder using cryptic language and meeting to hand over the money. Another key witness, former intelligence agent Peter Tóth, testified that Kočner had ordered him to surveil Kuciak and expressed a desire to have a journalist killed.

Long seen as a mafia-type figure with links to organized crime and corruption, Kočner is known for his close connections to the SMER party of former Prime Minister Robert Fico. The protests that followed Kuciak and Kušnírová’s murder forced out Fico – who regularly berated journalists – as well as the country’s interior minister and chief of police, all of whom were seen as bearing political responsibility for the murders. Meanwhile, media investigations and leaked chat logs in the wake of the murder shed further light on the extent of Kočner’s contacts and influence in the Slovak goverment, judiciary and security services, which had previously shielded him from consequences and which cemented anger over the “mafia state” many believe held power in the country.

Prosecutors have requested 25-year prison sentences for the remaining three defendants: Kočner, Zsuzsová and Szabó. All three deny the allegations.

The undersigned organisations welcomed the start of the trial as an important step toward securing justice for Ján and Martina and their families, who have suffered a deep and irreplaceable loss.

The killing of two people to prevent the release of news is an abhorrent and unacceptable act. We repeat our call for all those who played a role in this crime to receive just punishment. The Slovak justice system must ensure that impunity is not allowed to gain any foothold and must demonstrate to no one is above the law.

Guilty verdicts supported by the evidence would send a badly needed message that attacks on journalists and media workers will not be tolerated at a time when such attacks are on the increase in Europe, according to the MFRR’s most recent monitoring report. Globally, the vast majority of killings of journalists go unpunished. Both Kuciak’s killing and the 2017 murder of Maltese journalist Daphne Caruana Galizia raise the spectre of such impunity becoming the status quo even inside the EU. This must not be allowed to happen.

At the same time, convictions alone will not be enough to guarantee the safety of journalists and media workers in Slovakia in the future. Details revealed during the trial – including the extensive surveillance of journalists allegedly conducted at the behest of Kocner in order to blackmail them – reinforce the need for Slovak authorities to take urgent steps to counteract the structual failings that allowed the murder to take place and introduce effective measures to prevent violence in the future. An incident in June in which another Aktuality.sk investigative journalist, Peter Sabo, found a bullet in his mailbox demonstrates the continued threat to journalists in the country. It is recognised internationally that flawed judicial systems, corrupt law enforcement and the political nature of murders are factors that contribute to impunity.

This statement is part of the Media Freedom Rapid Response (MFRR), a mechanism, which tracks, monitors and responds to violations of press and media freedom in EU Member States and Candidate Countries.