IPI has monitored the trial. Verdict a major setback for justice and fight against impunity 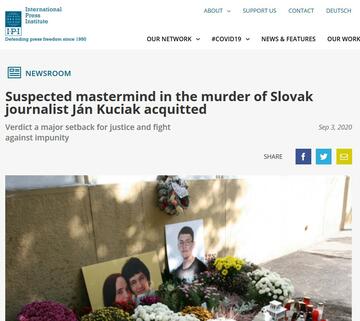 The acquittal of suspected mastermind Marian Kočner in the murder of Slovak journalist Ján Kuciak and his fiancee Martina Kušnírová is a major setback for justice and the fight against impunity, the International Press Institute (IPI) said today.

After a trial lasting six months, the Specialized Criminal Court in Pezinok, Slovakia, today found Kočner, a controversial businessman with links to Slovakia’s to political, judicial and security elite, not guilty of ordering Kuciak’s murder.

According to the court, while it was established clearly that the murder happened, there was not enough evidence to rule conclusively that Kočner had ordered the hit.

The court also acquitted Alena Zsuzsová, a Kočner confidante suspected of acting as a middlewoman in the assassination plot.

However, the court convicted Tomáš Szabó, the getaway driver, of murder and sentenced him to 25 years in prison for his role.

“Slovakia has to start it all over again, until the murderers are convicted”, said IPI Executive Board Vice Chair Beata Balogová, editor-in-chief of the leading Slovak daily newspaper SME and a key voice in the fight against impunity for Kuciak’s and Kušnírová’s murders.

“Only then our faith in justice in Slovakia will be restored. Until then, we will be a country where murderers of a journalist escape punishment. I also think of the families of the victims and how their wounds are being opened up again and again.”

IPI Deputy Director Scott Griffen, who attended the hearing, said: “We are hugely disappointed by this verdict, which repeats a tragic pattern we see worldwide: the hitmen go to jail while those ultimately responsible for the murder of journalists remain free. It means that Slovakia, which had a set positive example globally in indicting the suspected killers, must now start again.”

“This cannot be the end. It is imperative that investigators now restart their work, find who is responsible, and ensure that this case does not become yet another cold statistic in the battle against impunity.”

As the not-guilty verdict against Kočner began to be read out, members of the two families of Kuciak and Kušnírová left the courtroom. As part of the ruling, Tomáš Szabó was ordered to pay damages of €140,000 to the families of the victims. Kočner was convicted by the court only of keeping unreported ammunition at home. He was fined €5,000.

Kuciak, an investigative reporter for Aktuality.sk, and Kušnírová were gunned down on February 21, 2018, in the home they shared in Velka Maca. The killings shocked Slovakia and sparked the country’s largest protests since the Velvet Revolution. The protests forced out former Prime Minister Robert Fico, as well as the country’s interior minister and chief of police, all of whom were viewed as bearing political responsibility.

The connections between Kočner, long linked to organized crime and corruption, and key figures in the Slovak government, judiciary and security services fuelled public anger over the existence of a “mafia state” in Slovakia.

IPI has closely monitored progress in the murder investigation, visiting Bratislava more than a dozen times over the past year and a half to press authorities for justice.