The European Centre for Press and Media Freedom (ECPMF) as part of the Media Freedom Rapid Response (MFRR) is highly concerned over the detention and arrest of four reporters in the southeast of Turkey, on 17 December 2020. We call for their immediate and unconditional release. We condemn the continued persecution against the outlet as this is the third incident to take place in as many months 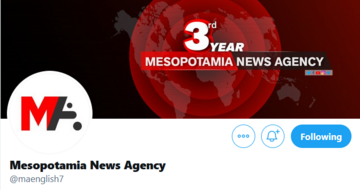 We call for their immediate and unconditional release.

We condemn the continued persecution against the outlet as this is the third incident to take place in as many months.

According to news reports , journalists for the pro-Kurdish Mezopotamya Agency (MA) Zeynep Durgut and Azad Kaya and Jinnews reporters Rojda Aydın and Derya Ren were taken into custody while entering the Cizre district, after reporting from Şırnak city. Durgut was arrested. She is said to be facing an arrest warrant in relation to the investigation launched by the Van Chief Public Prosecutor’s Office into the case of Osman Şiban and Servet Turgut. Police released the other three journalists after insulting them.

In October, four journalists were arrested following a raid on the MA offices, also in response to their reporting on Şiban and Turgut, which centres on credible allegations that Turkish soldiers tortured them and threw them out of a helicopter. Journalists Adnan Bilen, Cemil Uğur, Şehriban Abi and Nazan Sala remain in detention today. The Media Law and Studies Association (MLSA) visited Bilen and Uğur in prison after reports that COVID-19 measures were not followed in the facility. However, on 20 November the Turkish Constitutional Court decided to deny Bilen and Uğur’s petition for conditional release, saying there is effective access to healthcare in the prison and that the conditions of detention pose no risk to their safety.
At the end of November, MA reporter Dindar Karataş was arrested on charges of membership of a terrorist organisation in a raid at his home in the city of Van. Police also confiscated his camera and phone. MA reporter Hakan Yalçın was taken into custody in Ankara and released after interrogation.
ECPMF is highly concerned about the sustained attacks on Mezopotamya Agency and its reporters and collaborators. The arrest and detention of media workers for their reporting on public interest matters violates their rights to liberty and freedom of expression and the general public’s right to information. We call for the immediate and unconditional release of Zeynep Durgut, Azad Kaya, Rojda Aydın and Derya Ren, and all their detained colleagues.