Turkey: International delegation condemns passage of disinformation law and calls for protection of journalists ahead of 2023 elections 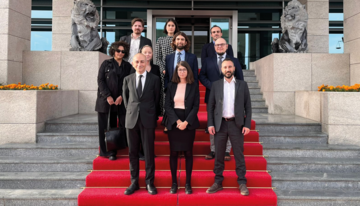 The original article has been published by IPI .

Turkey’s journalists are bracing themselves for a renewed attack on their safety and freedoms in the run up to the country’s 2023 general elections following passage of a new disinformation law that threatens to close down public criticism and debate, an international media freedom mission visiting Turkey from October 12 to 14, 2022, has found.

Article 29 of the law provides for three years’ imprisonment for those who publish “false information” with the “intention to instigate fear or panic, endanger the country’s security, public order and general health of society”. It was passed by parliament on Thursday, October 13.

The bill’s vague and problematic language and its future implementation by Turkey’s politicized judicial system will put journalists as well as millions of internet users at risk of criminal sanctions and could lead to much greater censorship and self-censorship in the country’s already compromised news landscape.

Presidential and parliamentary elections are due to take place in Turkey June 2023. The free flow of independent news and information is an essential condition to any democratic election.

The mission called on politicians across the political spectrum to pledge to end the crisis facing journalism and commit to extensive reforms in their manifestos guaranteeing media freedoms after many years of deteriorating conditions.

At the same time, stakeholders met by the mission expressed grave concern over the possibility of a greater crackdown on journalists and a heightened threat of physical violence ahead of the vote. We call on the government to guarantee that journalists are able to do their work free of intimidation and harassment in particular during the election period.

Following its meetings, the international delegation has identified the following priorities for action:

Stakeholders met by the mission also raised fears that the Center to Combat Disinformation, established this summer by the Directorate of Communications, will add another layer to the system of digital repression by increasing monitoring and harassment of journalists online.

Sustainable improvement for press freedom in Turkey cannot happen without ensuring the impartiality and independence of the judiciary. Turkey’s captured prosecution services and courts, combined with poorly drafted laws that are not in compliance with international standards, have led to the prosecution, conviction, and jailing of hundreds of journalists over the past decade for their journalism. Despite the reduced number of journalists in jail, the Judicial Reform Package, a 2019 initiative presented by the government as an effort to safeguard rights, has not succeeded in stopping the prosecution and legal harassment of journalists.

While the Turkish Constitutional Court (TCC) has issued some important pilot rulings pointing to structural problems with laws impacting free expression, there are still major challenges around implementation of the TCC’s rulings by both lower courts – a problem the TCC says it is working to address – and by lawmakers. Important freedom of expression related cases have faced years-long delays awaiting decisions from the TCC, underscoring serious concerns that justice delayed is tantamount to justice denied.

At the same time, meeting partners in Turkey have highlighted the problem that most TCC judges are nominated directly or indirectly by the president. Recent appointments to the court have given rise to serious concerns regarding political influence and underscore the need to free the nominations process from such influence.

Turkey’s media regulatory bodies must be depoliticised and reformed. They have all abused their powers to target and penalise independent media.

The safety of journalists is under increasing pressure as online threats and the verbal targeting of journalists by politicians spill out into violence on the streets. The Mapping Media Freedom platform has recorded 26 cases of assaults against journalists in Turkey in the past year alone. This rise in violence does not take place in a vacuum but is a result of the demonization of critical journalism as illegitimate and a threat to national security. Moreover, the impunity that has emerged in some of these cases risks fuelling further violence.

During the mission, the delegation called on all political parties to condemn any attacks on journalists and guarantee the rights of journalists to freely and safely cover the 2023 election campaign.

Over the past year, the prosecution and detentions of critical, independent media have continued. This year’s mission has visited Diyarbakir to show solidarity with 15 journalists and a media worker who have been held there in pretrial detention since June despite a lack of official charges. The mission renews its call for the release of all jailed journalists in Turkey and its support for their colleagues and families.

Finally, the process of press accreditation must be reformed and depoliticized so as to enable all journalists to do their work. Accreditation must be taken out of the hands of the Directorate of Communications, which has abused its position to remove the press cards of hundreds of critical journalists, and be replaced by a system run by journalists and media organizations themselves.

Later this year, the delegation will publish a full report on the mission in which it will provide more detail about the views expressed by stakeholders and officials met during the visit.